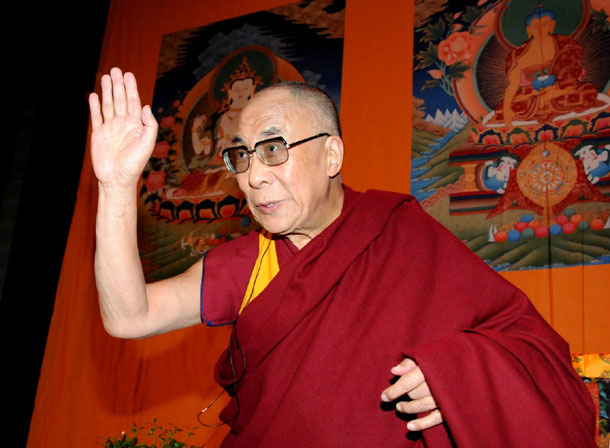 Dharamshala: After a postponed departure from Japan, Tibetan spiritual leader His Holiness the Dalai Lama has now arrived in the US for a two-week tour of the country. The delay was caused by a minor illness as his Holiness had contracted a sore throat and therefore had been advised by his physicians to rest, afraid that the 20 hour flight and the busy tour-program would take their toll and incapacitate His Holiness for the remainder of the trip. Physician to His Holiness the Dalai Lama, Dr. Tsetan Sadutshang has, however, ensured the public that the general health condition of his famous patient is good.

The preventive delay unfortunately meant the cancellation of His Holiness' program up until May 3rd, including a rare opportunity for a so-called Yamantaka initiation from the Highest Yoga Tantra class of initiations at a Long Beach branch of the University of California, Los Angeles (UCLA). Instead, the Abbot of the local Gaden Shartse Monastery, Ven. Jangchup Choedhen, Dr. Thupten Jinpa, principal interpreter to His Holiness the Dalai Lama, and Prof. Robert Thurman of Columbia University stepped in to participate in the scheduled programmes.

"We apologise for the inconvenience and disappointment these changes will cause, but His Holiness' health is paramount and we wish him a speedy recovery" read the UCLA's official statement on the matter. Recently the Dalai Lama approved the creation of a fund in his name to advance the study of Tibetan Buddhism at UCLA, which boasts the largest Buddhist studies program in the Western world. According to a UCLA spokeswoman, there are no plans to reschedule His Holiness the Dalai Lama's appearance in the near future, writes the campus newspaper the Daily Bruin.

During his tour of the US, His Holiness the Dalai Lama is slated to give 6 public talks, a teaching on Medicine Buddha Empowerment, 2 panel discussions - one on Non-Violence and another on Secular Ethics, as well as participating in a conference on the Power of Non-Violence. Hopefully, only his Californian audience will have been looking forward in vain.