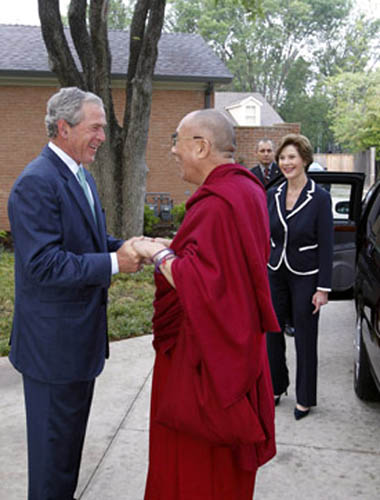 His Holiness went from the Bush residence to the Meadows Museum of Southern Methodist University, the venue of an interview on democracy conducted by Ambassador Jim Glassman, who is the Executive Director of the George W. Bush Institute The interview will be broadcast on PBS (American public television) and also archived in the Bush Center's democracy collection. In the interview His Holiness dwelt on his overall view of democracy being universal and explained the historical development of the Tibetan democratic experience.

Thereafter, His Holiness attended a luncheon hosted by the George W. Bush Center and was greeted at the door by President Bush. Ambassador Glassman in his welcome remarks announced that during the meeting with President Bush, His Holiness had presented a copy of the draft document, having His Holiness' editorial correction, which resulted in the Constitution of Future Tibet promulgated in 1963. He said that this document is the first contribution to The Freedom Collection at the George W. Bush Institute, which "presents the personal stories of struggle and achievement told by the men and women who led freedom movements from the last century through present day." Ambassador Glassman added that the document is being regarded as the founding document of the collection. The document is the copy of the Tibetan manuscript, Principles of the Constitution of Future Tibet, which was the framework for the Draft Constitution of Future Tibet of 1963. The Bush Center is releasing a statement on this document and photos on its Facebook page.

President Bush spoke next and recognised some individuals, including former senator Bill Frist. He said that he had been looking forward to today's meeting with His Holiness saying that during his presidency there have been extraordinary moments and some of these were his meetings with His Holiness. He said, "When you spend time with him, you realise that there is something unusual about him." The President called His Holiness "courageous but humble" and "a delight to be around." "When I think of the Dalai lama, I smile," he said. He said that His Holiness was courageous in the defense of liberty and understands that freedom means peace and he is a man of peace. Terming His Holiness' presence as a "priceless contribution" to the Bush Center and a "great gesture of friendship," the President invited him to the podium.

His Holiness began by saying that since their last meeting during the Congressional Gold Medal ceremony in 2007, he had been looking forward to meeting President Bush, whom he called "my dear friend." Revealing that President Bush had telephoned him soon after his gall bladder surgery, His Holiness said that he felt greatly touched by the gesture.

His Holiness said that he considered the President's support as being pro-justice and not pro-Tibet.

Terming President Bush' laudatory words about him as being "positive exaggeration," His Holiness said he was fundamentally just one of the six billion human beings working to contribute his share for the wellbeing of humanity. Emphasising the importance of developing inner peace, His Holiness said that even President Bush would know from his experience that money and power alone did not bring about inner peace. He added that scientists have also found that a warm-hearted person enjoyed better health.

His Holiness said his approach at promoting these human values is not based on religious belief but developed out of common sense, common experience and through scientific evidence.

His Holiness said that at the secondary level, he was a Buddhist and in the course of his meetings with leaders of the different spiritual faith, he found that all religions had the potential of bringing inner peace. Therefore, there was the need for inter-religious harmony, he said, adding that whether one liked it or not, realistically we all have to live together.

Talking about Tibet, His Holiness explained that everyone knows that he had relinquished political responsibility. However, he said he was a Tibetan. From this perspective he asked the people to understand the impact of Tibet to the world. He specifically highlighted the issue of Tibet's ecology saying that Chinese scientists have termed the Tibetan plateau as the Third Pole to indicate its significance, equal to the north and the south poles. He said many of the rivers of Asia originate in Tibet and that more than a billion people depend on the water from these rivers.

His Holiness said caring for Tibetan ecology had nothing to do with politics. He commended former Chinese president Zhu Rongji for recognising the importance of Tibetan forests for the environment and limiting deforestation for national interest. His Holiness, however, said that dues to corruption, etc., environmental degradation, including indiscriminate mining continue to be taking place in Tibet.

His Holiness concluded by suggesting that the participants in the luncheon who may know of ecologists could think of forming teams, in full co-operation with Chinese government officials, to study the status of Tibetan environment and to find ways to protect it.

His Holiness then took some questions from the audience in a session that was moderated by Ambassador Paula Dobriansky. To a question on whether the Chinese Communist regime was sustainable and whether there would be a democratic China, His Holiness said that China would change although no one knew when it would be. He said the Chinese authorities seem to be nervous about their position and referred to the report that the internal security budget of China surpassed that of the external defense budget.

Asked what were his greatest lessons, His Holiness said that the loss of his country was one; being the longest guest of the Government of India was another; appreciating the freedom of speech was another. His Holiness also said he learnt that tragedy brings about more inner strength adding that the Tibetan people were hardened by our tragedy.

His Holiness said that the world was heading towards a positive direction in response to another question. He recalled his conversation with the late Queen Mother of England who had lived for most of the 20th century and who had said that the humanity was becoming better as during her childhood days the issues of human rights and right to self-determination were not known. His Holiness also referred to increased ecological awareness as well as interest of scientists in inner values that showed the world was becoming better. His Holiness reminded everyone of the impact of global warming and said some of his people have said that next year 2012 there would be some solar storm.

Following his remarks, His Holiness presented a mounted Tibetan scroll painting of the Buddha for the George W. Bush Center.

His Holiness then departed for Fayetteville in the state of Arkansas for the next stage of his visit. On arrival officials of the University of Arkansas received him. His Holiness will have two events at the University on 11 May. These will be webcast live on 11 May at 9:30 a.m. and 1:30 p.m (7 pm and 11 pm in India and 8:30 pm and 12:30 am in Tibet) will be streamed live at http://dcestream.uark.edu/HHDL.