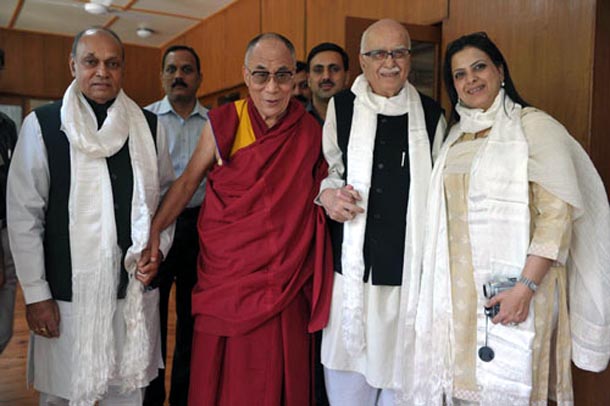 Dharamshala: On Wednesday, May 18, the spiritual leader of Tibet, His Holiness, the Dalai Lama, received a special guest as BJP leader and former deputy prime minister, L.K. Advani, who is in Dharamshala to watch the IPL cricket matches, paid an afternoon visit to the Tibetan spiritual leader at his residence in the Himalayan town of McLeod Ganj.

Despite the leisurely nature of Advani's visit to Dharamshala, the pair did find the time to discuss politics. "We discussed the situation in Tibet and the attitude of China," Advani told reporters after the hour-long meeting which was followed by a lunch. Also present at the meeting with His Holiness was Himachal Pradesh' Chief Minister Prem Kumar Dhumal.

Advani had been invited by the Himachal Pradesh Cricket Association president Anurag Thakur, who is the BJP MP from Hamirpur, and reached Dharamshala Tuesday evening together with his daughter Pratibha to watch the match between Kings XI Punjab and Royal Challengers Bangalore. Upon their arrival at Kangra Airport, Advani was greeted by Kalon Tripa Prof Samdhong Rinpoche and the newly elected Kalon Tripa Lobsang Sangay.

Explaining he had met with His Holiness the Dalai Lama some time back Advani said that "[I] promised him that I will visit Dharamshala to meet him and [the] IPL match provided this opportunity".

"Both His Holiness the Dalai Lama and Advani are friends and have a lot of respect for each other," said His Holiness' Secretary Chimme Choekyappa. He also said that there were no other leaders present at the meeting and that it was a "normal vist".

After the meeting with Advani, His Holiness also met with cricketers of the Kings XI Punjab team, headed by captain Adam Gilchrist. The group of international players had sought blessings from His Holiness and came to see him at the main Tibetan temple, (Tib: Tsuglagkhang), in the town.

Talking to the players at the meeting, which was open to the public, His Holiness lauded the peaceful co-existence and harmony among different world religious traditions in India and said "my brain is filled with thoughts from the ancient school of Nalanda, and my body feeds on Indian chapati, rice and dal", to the amusement of the players. He also said that his knowledge about sports is zero and that "last time when we were watching the game, I asked CM Dhumal who were winning and who were losing". 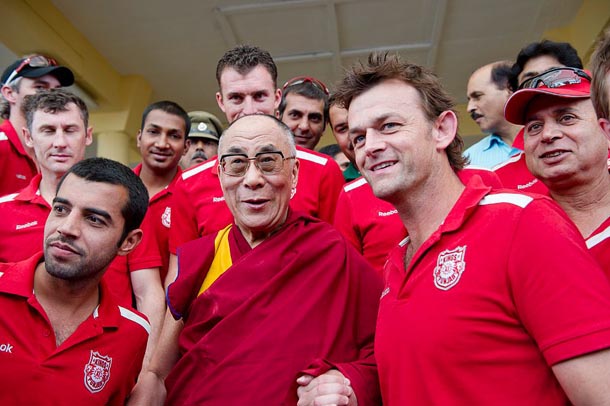 official of His Holiness the Dalai Lama office told reporters, His Holiness will not attend the most recent match on the May 17 as he had just returned from a 14 day long tour of the US and Japan.

His Holiness the "Dalai Lama is tired after a long foreign tour and wishes to take rest ahead of his lectures in Dharamsala on June 3 and 4. He will deliver lectures on Buddhism in the mornings to Tibetan youth at upper TCV School Auditorium", said Tenzin Taklha, joint secretary at the Dalai Lama's office at the time.

The Himachal Pradesh Cricket Association (HPCA) had extended an invitation to the spiritual leader to be the chief guest for the day and night match, but while he was unable to attend, His Holiness the Dalai Lama said he will witness the next IPL match between the Kings XI Punjab and Deccan Chargers which is scheduled for May 21.