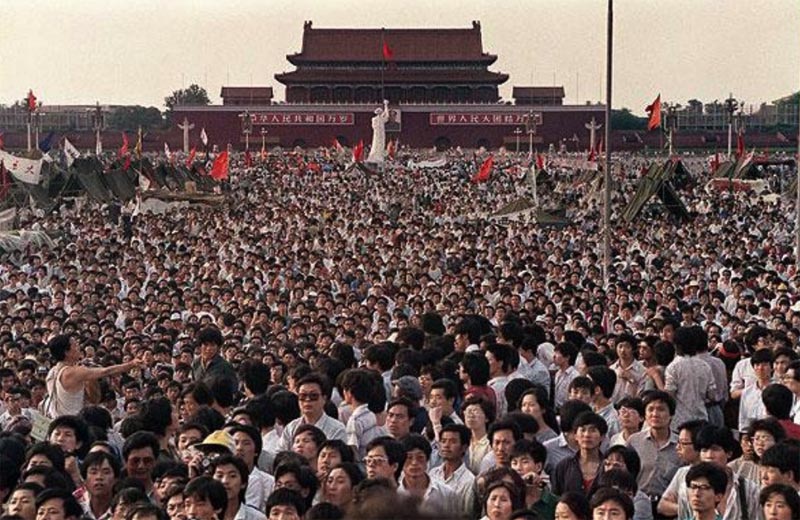 Dharamshala: -During this 22nd anniversary of June 4th, Tibetans in exile, Chinese and Vietnamese Community in solidarity call on supporters around the world taking to the streets to highlight the broader crackdown in China, as well as the situation in Ngaba worsened through April till now. As Tibetans around the world are commemorating this evening, the anniversary of the massacre in Tiananmen Square, and are drawing comparisons with the recent Chinese repression at Kirti Monastery of Ngaba region of Tibet: peaceful human rights demonstrations violently repressed by the armed police and troops, followed by Phuntsok's self-immolation to mark the third anniversary of bloody crackdowns in all parts of Tibet including Tibetan capital, Lhasa.

"Tibetans, Vietnamese and supporters from seven organizations stand in solidarity with Chinese students, labor organizers, and pro-democracy advocates as their struggle for a democratic and Transparent China was violently crushed by the tanks in Tiananmen Square (Note 1)," said Brigitte Graefin von Bulow, Chair of United Nations for a Free Tibet, "We urge the Chinese government to review the events of June 4, 1989, and to have the courage and far-sightedness to embrace more truly egalitarian principles and pursue a policy of greater accommodation and tolerance of diverse views." This is also promoted by His Holiness the Dalai Lama.

In recent days, hundreds of Chinese dissidents have been detained and harassed since the Jasmine Revolution separated in China, which obviously led to the worries and fears in the hearts of Chinese leaders. Meanwhile, the Military Siege of Tibetan Monastery in Ngaba continues with armed police and troops on high alert while international observers and media are still banned from the region.

"June 4th marks the military crackdown on the pro-democracy movement in Beijing's Tiananmen Square in 1989, because Deng Xiaoping dared to use defense forces against unarmed students and citizens, which led to another 22 years' success in maintaining Communist Red China. ", said Chin Jin of the Federation for a Democratic China, "The true meaning of June 4th should not be just limited to the annual commemoration, but a wake-up call on awareness raising of the democracy and freedom in China day and night...We need to leave no stone unturned on our mission of seeing the realisation of a truly democratic China."

A press statement was released on 4th May by seven NGOs including United Nations for a Free Tibet, Federation For A Democratic China, The Joint Working Committee for the Chinese Democratic Movement, Youth Vietnamese group fighting for Freedom, Democracy, and Human Rights for Vietnam, The youth Vietnamese group Pho Duc Chinh (Southern California, USA), The Vietnamese Heritage and Freedom Flag Movement and the Freedom Fighters PalTalk Group of South California, USA. Here together they demand International society to:

- Press their government to issue a public statement of concern about the recent crackdown in Tibet and China, and to put an End to China's Terrorist Attacks and Expansionism in the Southeast Asia Sea  and to stop the China's terrorist attacks against Vietnamese fishermen:
- Convey to China's leaders the message that the release of all Prisoners of conscience and its security forces must withdraw from Ngaba region of Tibet.
- Insist governments send embassy representatives to express concern to relevant Chinese Ministries.
- Push for international observers and media to be given unfettered access.
- Solidarity protest and vigils will be held in British, Germany, and the United States, on the Tiananmen anniversary, June 4th.

The Tiananmen Square massacre occurred on 4 June 1989. Hundreds of people lost their lives when Chinese troops crushed the pro-democracy protests that began in April that year. The exact number of deaths remains unknown as the Chinese government has refused to acknowledge the incident or the deaths. Thousands of people were jailed at the time for participating, promoting or connections with the pro-democracy protests.