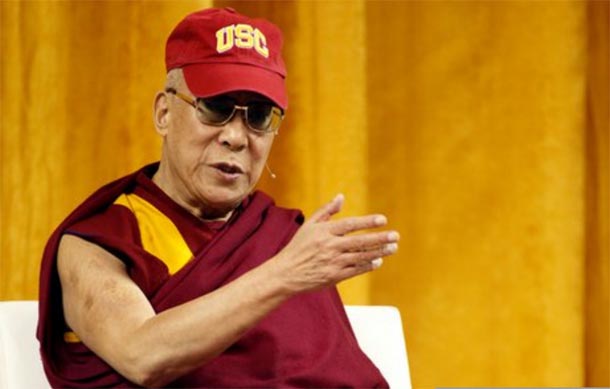 Dharamshala - Tibetan spiritual leader His Holiness the Dalai Lama spoke candidly in a recent interview about notions of freedom and democracy. His message, aired on June the 2nd, was one that could appeal not just to the Tibetan people, but consisted of a universal message for all citizens of the world during a year of enormous democratic change across the world.

Speaking as part of the ‘Freedom Collection' to Jim Glassman for ‘Ideas in Action', his Holiness had a peaceful message that could appeal to all walks of life, and his views on how suppression from China could cause another cultural revolution.

Divulging on the change that occurred in Tibetan democracy under his leadership, the 14th Dalai Lama of Tibet stated, that upon reaching India in 1959:

"we start some sort of change. -not like the previous sort of system but more, sort of, divisions among the, sort of, cabinet ministers like that. So then, [19]60, we start work for democratization".

"Then in 2001, we already achieved elected political leadership. Since then, my position is something like semi retired position. So-- I really feel, you see, that's our achievement. Now fully a democratic, sort of, system like that".

When asked about his retirement from the political scene, His Holiness added:

On a more serious note, the Dalai Lama discussed the worsening situation in Tibet, drawing upon the re-education of Tibetans by Chinese leaders, the dilution of the Tibetan culture, and the suppression of his people.

"Tibetan[s] express now [a] semi-cultural revolution returning' - he added, highlighting that the short sightedness of Chinese political figures, was risking a 'semi-revolution' by the increasingly suppressed people under their rule - namely Tibetans.

His Holiness recollected a conversation upon his arrival in India on the subject of Gandhian methods of peaceful protest. Though admittedly Chinese rule is far more oppressive than those faced by Gandhi, His Holiness remains a strong advocate of the great Indian figurehead's methods, and remains a great - living- beacon of hope for advocates of peace.

"I wondered if you have a message for people around the world who are struggling for freedom?"

"I think people have to carry their spirit-- and their struggle. And I think possibly nonviolent way. Long run, that's more effective."

"Peaceful, popular movement... So, the popular sort of peaceful movement is now become I would say I think the reality... So, I think that I want to share. Please keep determination, willpower because we have justice. In my-- the lifelong experience or observation, ultimately, truth always remain stronger than for-- power of force or power of gun. Very clear. The gun temporarily very powerful. (CHUCKLE) Everybody loves one's own life. So, when gun shows-- out of fear, it's a little discipline there. But, that's temporary method. I think world history shows that. Therefore, the-- the struggle for freedom, democracy is really-- right, reasonable, and everybody have the right to be free."

Source: Ideas in action with Jim Glassman. A production of Grace Creek Media and the George W. Bush Institute