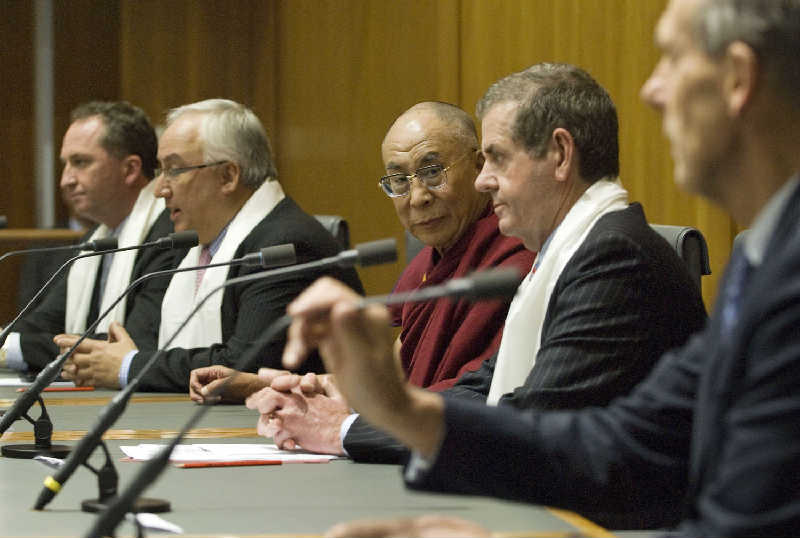 Melbouene: - The spiritual leader of Tibet, His Holiness the Dalai Lama Tuesday, 14th June  said the world should help China to become a good member of the international community and that China must also understand its own responsibilities.

"As a responsible member, China should allow more freedom of information and develop transparency in the government," His Holiness the Dalai Lama said in his address at a parliamentary reception hosted at Australian Parliament in Canberra Tuesday.

Around 80 Members of Parliament and Senators along with a large number of advisers of parliamentarians and ambassadors from five countries attended the reception.

Prior to speaking at the parliamentary reception, His Holiness met with 15 members of the All-Party Parliamentary Group for Tibet, which organised his visit to the parliament. Four core members of the group - Mr Michael Danby MP, Mr Peter Slipper MP, Senator Bob Brown and Senator Nick Xenophon - accorded warm welcome to His Holiness on his arrival at Parliament House this morning.

They discussed a wide range of issues including the evolution of Tibetan democracy and its significance for the Tibetan people.

His Holiness the Dalai Lama congratulated Mr Ken Wyatt, first indigenous person to be elected in the House of Representatives. Mr Wyatt has recently joined the Tibet parliamentary group and has shown great interest in understanding the Tibet issue.

Mr Peter Slipper, MP and co-chair of the All-Party Parliamentary Group for Tibet, read out a cross-party statement on behalf of the group and applauded His Holiness for his success in establishing a modern Tibetan democracy in exile.

The parliamentary group for Tibet said "it recognises the dire threats to Tibetan culture and livelihoods, and supports the Tibetan people's aspiration for genuine autonomy within the framework of the Chinese constitution."

Acknowledging that a stable and prosperous China is important to Australia's future, the group affirmed that the resolution of Tibet issue is in Australia's national interest.

The All-Parliamentary Group for Tibet currently consists of 26 members and some of them were part of the first Australian parliamentary delegation that visited Dharamsala in 2009.

"This was a rare opportunity for the diplomats and parliamentarians from both houses to hear His Holiness speak on the situation in Tibet and China and the importance of upholding moral principles in politics," Ms Tenzin Kyinzom Dhongdue, research and government relations manager at Australia Tibet Council, told this website.
His Holiness also joined five representatives of major religious groups for an inter-faith prayer service for world peace at the Parliament House.

A brief visit to the House of Representatives during Question Time was an interesting highlight of His Holiness' day in the Parliament. Speaker Mr Harry Jenkins, MP, welcomed His Holiness the Dalai Lama as a "distinguished guest to the House as His Holiness watched the proceedings from the gallery".

Apart from his meetings in the Parliament, His Holiness gave a public talk on "Happiness, Life & Living" to a packed audience in the Royal Theatre at National Convention Centre. In the morning, he also took the opportunity to meet members of the Tibetan, Bhutanese and Mongolian communities.

His Holiness leaves Canberra tomorrow morning. He will be in Brisbane and the Sunshine Coast in Queensland for the next three days.