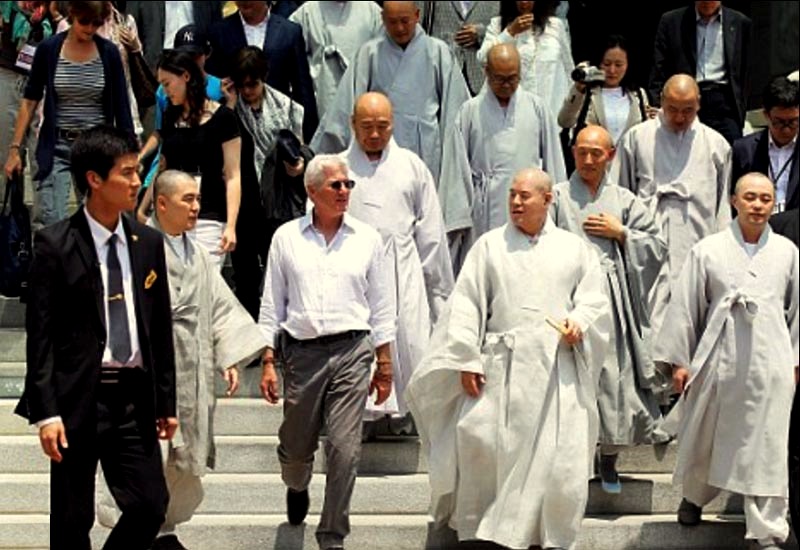 Dharamshala: Hollywood star Richard Gere on Wednesday, (22 June) has expressed his deep concern over the ongoing crackdowns, torture and killing in Tibet, during a visit to South Korea to promote an exhibition of photos he took in the Himalayan territory. Gere said some of the images in the exhibition illustrated what he called the political oppression faced by his 'Tibetan brothers and sisters'.

Gere is a longtime campaigner for the rights of Tibetans and a vocal critic of the Chinese government's treatment of Tibetan activists. 'I think it's impossible to look at these photographs and not realise the extraordinary suffering of the Tibetan people,' he said.

Gere is in the capital Seoul promoting an exhibition of photographs of Tibet and India taken by the Hollywood actor and other photographers including Annie Leibovitz, Steve Meisel and Jerry Uelsmann. He has been joined on the visit by his wife, Carey Lowell, and the couple's on Homer. He said China's government is torturing and killing people in Tibet.

One photo shows several drawings depicting the torture of Tibetan nuns by Chinese authorities. Gere said he found the drawings on the wall of a convent in Dharamshala, the Indian city where Tibet's government in exile is based. 'The same kind of torture, the same kind of deaths... in Chinese prisons in Tibet are still taking place today,' said Gere, who appeared before Congress early this month to urge greater US support for Tibetan rights.

According to the Mail-online, Gere strengthened his Buddhist beliefs Tuesday (21st June) with a visit to the Jogye temple, a Koean temple in South Korea. After burning incense, he signed the temple's guest book with a message that wished 'peace and happiness' for all beings in the world. The practicing Buddhist the spoke saying that that he appreciates Korean Buddhism's traditions and wants them to stay strong.

Gere's interest in Buddhism began during 1978 when he travelled to Nepal with Brazillian painter Sylvia Martins. He is a fierce supporter of Tibetan people and His Holiness the Dalai Lama and has been a persistent advocate of human rights in Tibet. In last week he called on the United States' Government to give more to support the right of people in Tibet.

Appearing before Congress, he said President Barack Obama 'has found new footing on how to deal with the Chinese' but would 'like to see him go further.' He also warned that the Tibetan language was under threat and called for Obama to encourage U.S. students in China to study the language. Gere currently has two films in the pipeline. He is starring in a movie titled 'The Double' while 'Arbitrage' is in the early stages of filming.