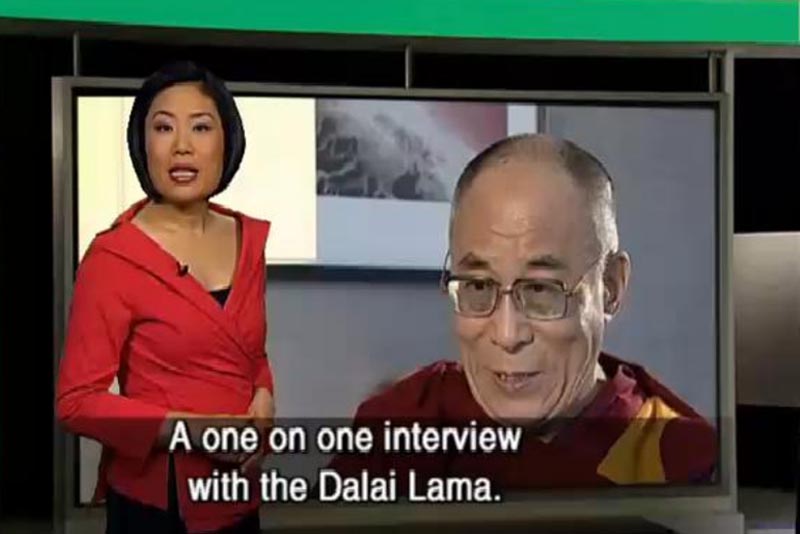 Melbourne: The spiritual leader of Tibet, His Holiness the 14th Dalai Lama has appeared this evening in a televised interview with Mandarin News Australia, which airs on the country's Chinese-language station SBS Two, speaking on such topics as Tibetan autonomy, the next Dalai Lama and the unbalanced relationship between Australia and China.

The "charismatic Tibetan leader" was interviewed by Amy Chien-Yu Wang during what was recently his eighth visit to the country, and the young Chinese-Australian journalist asked him a range of questions aimed at clarifying his position on these issues for the show's mostly Chinese audience. Among those questions was a particularly relevant one about the current close relationship between Australia and China in the Asia-Pacific zone, to which His Holiness answered that while good relations were important, only a friendship based on respect and not on appeasement would produce a win-win outcome.

When asked how he felt about the Chinese government labelling him a troublemaker, His Holiness laughed and joked that "in order to justify that accusation, I have to create little problems!", adding that such accusations do not worry him because common sense allows most people to see that what he stands for is Truth. He said however that "communist hard-liners" who were narrow-minded and full of ignorance failed to see this reality and did not know what it was. Speaking on his view of Tibetan autonomy, His Holiness claimed that to escape the current disastrous "one side win, one side lose" situation in Tibet, genuine autonomy should involve handing control over religious and educational affairs to the Tibetan people.

Miss Chien-Yu Wang also raised the subject of the Dalai Lama's recent devolvement of political power to the elected Kalon Tripa Lobsang Sangay, and asked whether this was a move on his part to prevent the Chinese government from assigning their own Dalai Lama. This question seemed to amuse His Holiness, who stated that he still had at least fifteen or twenty years ahead of him, and that it would be quite difficult for Beijing to appoint a young boy to his position while the existing "quite popular" Dalai Lama was still there. He also confirmed that his reincarnation would most likely occur outside of Tibet and could even be a little girl, particularly as females are more capable of showing affection and compassion, and concluded that only time would tell how the next Dalai Lama's role would be different from his own.

His Holiness lastly reiterated his position that today's society is in need of moral education, based on compassion and the idea that people must show others affection in order to serve humanity. When asked how it felt to be a refugee, he gave one of his characteristic chuckles and said that Tibetan exiles had found a new home where they had plenty of freedom, something they do not have in their Tibetan homeland, and that those in exile in India had returned to the birthplace of Buddhism and thus had many opportunities to learn new things.

The interview and other related news can be found on SBS Australia's webpage: http://www.sbs.com.au/chinese/.