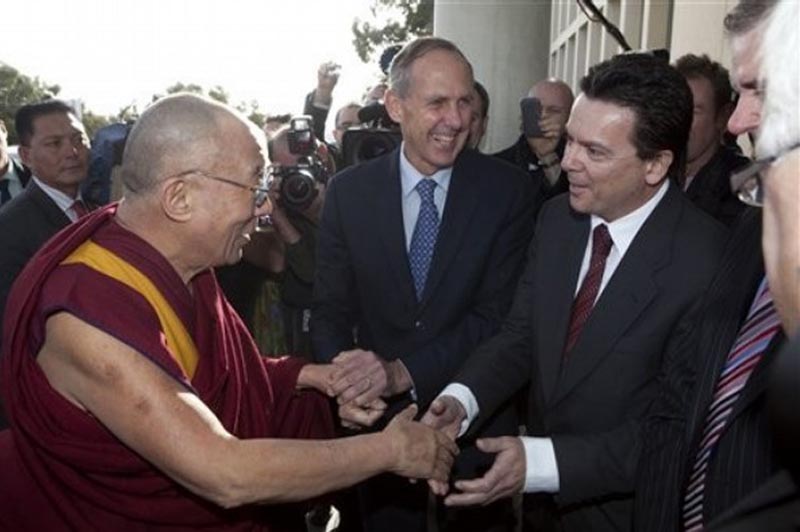 A motion was passed from Senators Bob Brown and Nick Xenophon, supporting the Tibetan people to have His Holiness the Dalai Lama of Tibet to return to his homeland. The statement passed in the Senate on the 15th of June, 2011.

The motion "wishes the people of Tibet well in their aspiration to have His Holiness the Dalai Lama return home to Tibet's capital Lhasa."

Among pressure and criticism from Beijing, and from within her own party, the Australian PM Ms Gillard did not meet His Holiness on his recent visit. A statement was issued, which:

"...expresses disappointment that neither the Prime Minister (Ms Gillard) nor the Minister of Foreign Affairs (Mr Rudd) were available to meet His Holiness the Dalai Lama" [during his visit to the Parliament House].
Two weeks before His Holiness' visit to Perth, the Chinese consulate-general has reportedly put pressure on state members of parliament not to meet the Dalai Lama. In his media release, Senator Ludlam said:

"As strange as it may seem that the Chinese government is terrified of a 76 year-old Buddhist monk, this is not the first time they've tried this tactic. It would be useful for them to explain why they are urging democratically elected members of Parliament to not hear His Holiness speak."

The pressure that Australia is putting on Beijing comes as refreshing news for the Tibetan community, and for the Dalai Lama himself. In recent weeks the region has witnessed enormous crackdowns, and international pressure on the Chinese regime is mounting.

"This recognition of the lost freedom of Tibetans to have their spiritual leader at home will be welcomed by seven million Tibetans, including those in exile around the world," Bob Brown of the Green party said in Canberra.