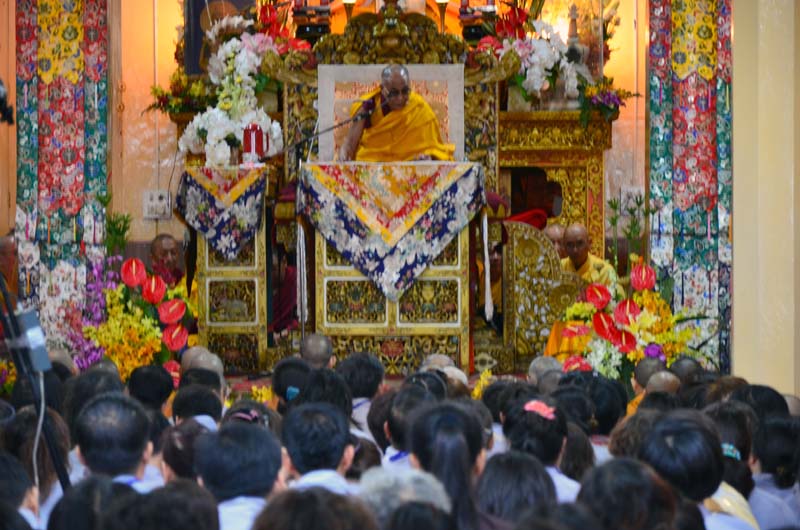 Dharamshala- His Holiness the 14th Dalai Lama of Tibet addressed an audience of around 5000 people in the main Tibetan Temple Tuesday (28th June), in his home in-exile in Dharamshala, North India. His Holiness said there are many different philosophies in major religions, but what is of basic importance is compassion, love for others, concern for others' suffering, and reduction of selfishness.

Part one of the two-day teaching divulged on the subject of 'Je Tsongkhapa's Praise to the Buddha for his Teachings on Dependent Origination' (Tibetan: Tendrel Toepa), which was at the request of a group of Vietnamese Buddhists who arranged to visit His Holiness in India.

The audience consisted of some 500 Vietnamese visitors, and it was estimated that around 1300 of the audience were non-Tibetan foreigners. "All major religious traditions carry basically the same message, that is love, compassion and forgiveness ... the important thing is they should be part of our daily lives. The same goal of benefiting humanity through spiritual practice, and the same effect of making their followers into better human beings."

His Holiness the Dalai Lama spoke in depth this morning on Je Tsongkhapa's Praise to the Buddha for His Teachings on Dependent Origination. The speech consisted of preliminary recitations from ‘The Heart of Sutra', ‘Verses of Taking Refuge', followed by ‘In Praise of Dependent Origin', and was met by a rapt audience.

He was thanked warmly by the Vietnamese delegate, who sat in contrast to the red-robed Tibetan Monks and Nuns, in their pale grey uniform. However, despite differences of appearance, the two spiritual groups gathered below the seat of His Holiness the Dalai Lama and listened intently to his extensive knowledge on the ‘tendrel toepa'.

His Holiness addressed the audience cheerfully on the overcast, rainy morning in the monsoon period for the region in India's Himalayan foothills.

"Did you all sleep well?" he asked, referring to Dharamshala's high altitude aiding good nights.

He added jokingly: "Did any of you get an upset stomach from the water yet?", to which everyone laughed.

Generous distributions of bread and Tibetan tea were handed to the audience, followed by spiritual monetary gifts to the monks and nuns in the crowd.

"I was sitting in a place next to a walkway, just ten meters away from His Holiness the Dalai Lama.  I had a fantastic view.  I was touched by all of the different types of people who stopped to look and their various reactions of awe and subdued delight upon seeing him. Everyone from Sikh families to corporate Americans to older ladies with canes to Indian children had wonderful reactions to observe while I listened to the teachings. I feel so very fortunate that I was able to travel to India and to Dharamsala while he was giving a teaching and that I was able to be part of the experience," a 38 year old woman from USA, Elena Wealty told The Tibet Post International.

His Holiness the Dalai Lama drew upon other major religions, stating that they all aimed to end and reduce suffering. However, he added the main differences between Buddhism, and highlighted the belief of reincarnation, setting Buddhism apart. "All major religious wanted to lead their followers away from the paths of negative deeds caused by ignorance and to introduce them to paths of goodness," said His Holiness.


The talk was concluded with a Mandala offering, a dedication (of merits), a prayer for the long life of His Holiness the Dalai Lama, and a prayer to generate Bodhichitta. His Holiness shall confer an Avalokiteshvera Permission Initiation (chenresig jenang) in part two of the teachings tomorrow.