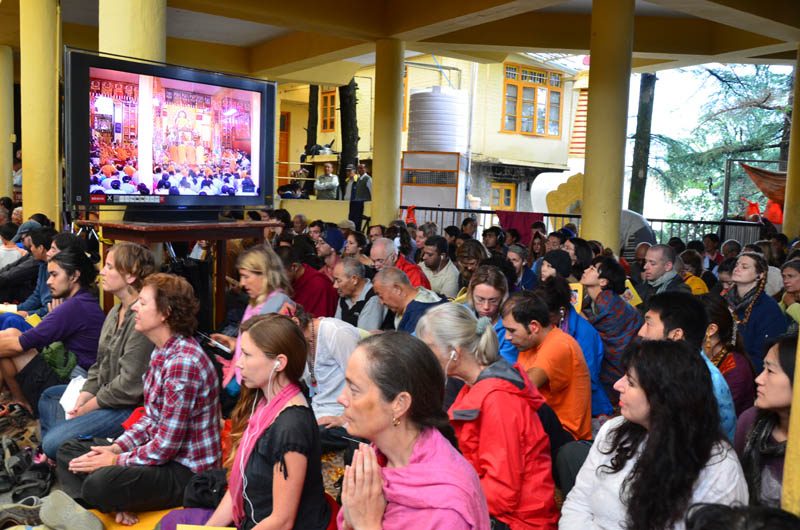 Dharamshala: - Today, 29th June, His Holiness the Dalai Lama gave his second day of teachings in Dharamshala at the main Tibetan Temple. The morning talk concluded His Holiness' two days of speaking at the request of a group of Vietnamese monks. Before conferring a special purification ceremony, His Holiness spoke about the importance of keeping negativity out of one's thoughts and actions.

According to the Central Tibetan Administration (tibet.net), 4,835 people registered for the two-day event. Among these were 500 Vietnamese, 719 foreigners, 1459 monks and nuns, and 1490 general public.

His Holiness addressed the audience in Tibetan, with an immediate live translation into Vietnamese. Simultaneous radio translations were made available in English, Chinese, Korean, Spanish, Russian, Japanese and others.

At this morning's session, as he addressed this multinational audience, His Holiness first spoke about purifying the mind. He urged his listeners to "restrain yourselves from all negative actions of body, speech, and mind...when the mind is clear, stains can't stay in the mind."

He stressed his belief that through any religion, whether Buddhism or another, one can follow one's own faith to help in "overcoming destructive thoughts and emotions." He emphasized that when he teaches abroad, he urges listeners to follow their own traditional religions.

His Holiness also gave a psychological insight into the importance of controlling and observing the mind, saying, "when someone becomes angry at someone, they see that person as 100% bad, but 90% of that is really their own projection."

Felizitas, a German woman and longtime Dharamshala resident, stressed that while some of the high-level Buddhist philosophy His Holiness speaks about can be difficult for the average person to grasp, it is "always incredible to be in His Holiness' presence."

She also spoke about the chance to see him speak here in Dharamshala. "I've had the opportunity to see His Holiness the Dalai Lama speak many times throughout my life, and every time is special. It really makes a difference to see him in Dharamshala, though, and to experience what he means to his people. It is amazing how their devotion and loyalty to His Holiness unites the Tibetan community and gives them a common focus."

Another listener, Mikk Tamme from Estonia, said, "I don't think you can evaluate teachings by spiritual teachers as good or bad. The important thing is to listen openly, and you will learn."

His Holiness concluded the morning session with conferring the Avalokiteshvera Permission Initiation (chenresig jenang), a Buddhist purification initiation ritual used to drive away evil forces. His Holiness used a painted sand mandala and ritual chanting throughout the ceremony.

"After recieving the initiation you should give good advice to others and help others," His Holiness advised.

The session ended with a puja, or prayer, for His Holiness' long life as thousands of observers watched him descend the temple stairs.

"It's really nice to see how he radiates such amazing energy," said Geetu, a woman from Chandrigar, India. "When you observe people who see him for the first time, their faces just light up with hope and love. He represents love, peace, and strength in the world today."