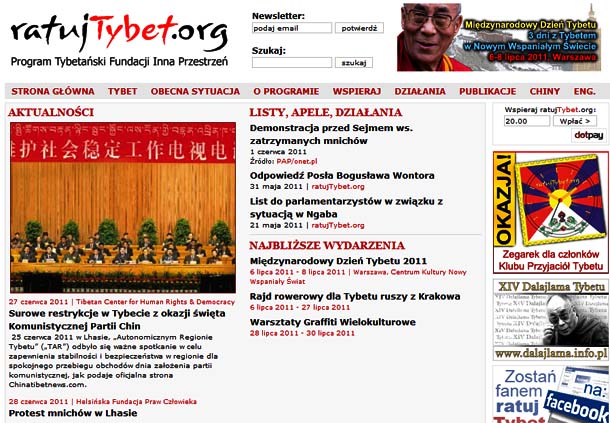 Warsaw: - Tibet friends inspired by a small group of young Tibetans and supported by Tibetan Community in Poland will start twenty days long bicycle tour from Krakow, a historical capital of Poland to Gdansk on the coast of Baltic Sea - where Solidarity Movement was born lead by Lech Walesa in 80's. On the route group of Tibetans will meet local activist and take part in various events in major cities to promote case of Tibet and collect signatures about situation in Kirti Monastery in Eastern Tibet.

"Chinese government is determined to destroy our Tibetan culture and stop all dissent. But we will not be silent" - told Kunchok Sangpo, main organizer of the Cycling for Tibet from Students for a Free Tibet, Warsaw.

Third year on Tibet Roundabout in Warsaw, graffiti painters and Tibet activist create works dedicated to Tibet. First paintings were created in 2009 to celebrate Honorary Citizenship of Warsaw offered then to His Holiness Dalai Lama by Council of Warsaw. In October 2010 a Mayor of Warsaw officially opened Tibet Roundabout and situated here information dedicated to Heroes of Tibetan Upraising 1959, His Holiness wrote then in his message: "The dedication of this "Tibet Roundabout" is another means of connecting the city of Warsaw and Tibetan people". This year painting is supported by Municipality of Warsaw.

Three Days with Tibet in Cultural Center in Warsaw

Co organized by Tibetan Programme of The Other Space and Lech Walesa Institute events will start with concert of monks from Drepung Monastery in India. Every day film screenings - with Polish premiere of famed "Sun Behind Clouds" and meetings about cultural resistance in Tibet with Dechen Pemba and members of Polish PEN Club, has to bring attention to new developments in Tibet, particularly new generation of Tibetan voices expressed by Internet writings and songs.

All events are co-organized by Tibetan Programme of The Other Space Foundation (www.ratujtybet.org), various partner organizations, activists and volunteers.