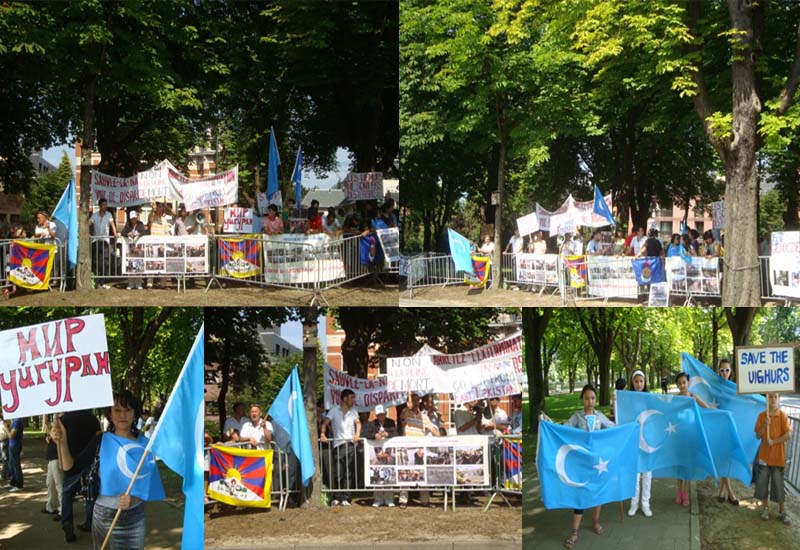 Dharamshala: - A group of 10 Tibetans joined Uyghur protesters outside the Chinese embassy in Belgium on July 6, showing their solidarity with the people of East Turkestan. The peaceful demonstrators were protesting the events of July 5, 2009 in Urumqi.

The group of 75 protesters included, besides Uyghur and Tibetans, supporters from Lebanon, Iran, Albania, Iraq, China, and Mongolia. During the demonstration, organized by the Uyghur Association Belgium, the group held up banners with various slogans, among them "Free Uyghur," "We Want Justice," "Freedom for Tibet" and "Stop the Genocide."

The July 5, 2009 events that sparked the demonstrations occurred in Urumqi, when another group of demonstrators gathered to protest the killings of migrant Uyghur workers in Shaoguan, China on June 26th. After some riots broke out, the Chinese police reacted violently and arrested around 1500 people for taking part in the protest.

Amnesty International has released eyewitness accounts of Chinese police reacting by shooting and beating people in the crowd. There are also numerous accounts of the subsequent death sentences and torture imposed on many of those arrested and imprisoned.

According to a press release by Dennis Barbion, "Of course the situation in East Turkestan is similar to Tibet, as all minorities suffer from the oppression by the Chinese government. It was heartwarming to see more Tibetans showing their solidarity to the Uyghur."

Following the 5 July events, China has refused to allow any independent investigations, and have prosecuted some who have given sensitive information about that day.

"By treating individuals who peacefully express their opinions or divulge information sensitive to the authorities as "terrorists", the Chinese government perpetuates a climate of fear which helps to ensure a near-total black-out of information regarding the human rights violations suffered by Uyghurs in China," asserted Barbion.

The World Uyghur Congress (WUC) has called for the Chinese government to conduct a meaningful investigation into the protests, to release of anyone who protested peacefully, to prove that the trials were conducted fairly and in accordance with international standards, and to address the ethnic violence behind the attacks.