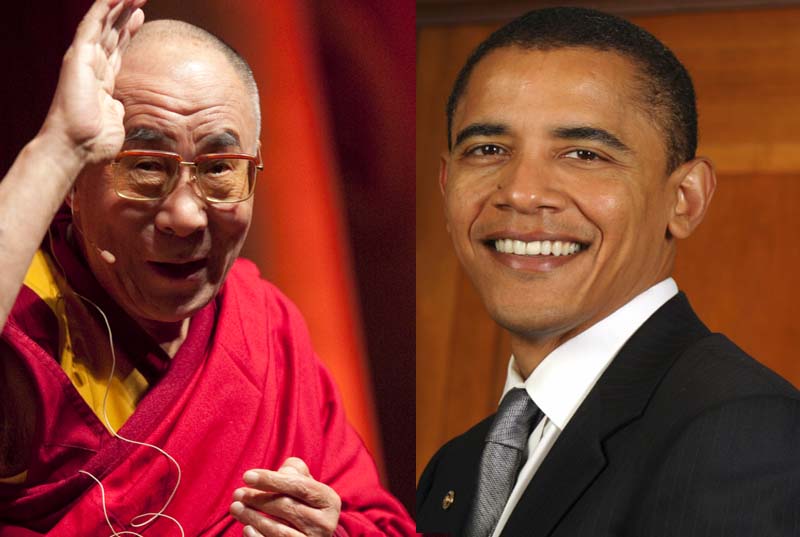 Dharamshala: - The President of the United States of America, Barack Obama will meet with the spiritual leader of Tibet, His Holiness the 14th Dalai Lama at the White House Saturday, 16 July, the White House said on Friday.

The meeting in the White House Map Room is expected to last at least 30 minutes and the duo might discuss several issues including the current situation in Tibet, recent political changes in the Tibetan Administration and China-Tibet dialogue.

Tibetan spiritual leader who is currently in Washington DC for an 11-day Buddhist teaching and public talks to promote world peace and religious harmony.

"The president will highlight his enduring support for dialogue between the Dalai Lama's representatives and the Chinese government to resolve differences," the White House said.

US official says Obama will urge that representatives of His Holiness the Dalai Lama be allowed to engage with Chinese authorities and will call for the preservation of Tibetan culture.

"This meeting underscores the president's strong support for the preservation of Tibet's unique religious, cultural and linguistic identity and the protection of human rights for Tibetans," it said.

This announcement comes just two days before His Holiness the Dalai Lama concludes his 10-day visit to the country, where the Nobel Peace laureate has been presiding over a major Buddhist teaching, the Kalachakra initiation for world peace and religious harmony.

During his time in Washington, His Holiness the Dalai Lama met with several top US officials; Speaker of the House Representatives John Boehner, Democratic Leader Nancy Pelosi, the Senate Foreign Relations Committee Chairman, John Kerry, as well as other officials and dignitaries.

After the White House announced the meeting to be held Saturday, the ministry and the Chinese ambassador to the United States lodged a "solemn representation" against it, Hong said in a statement on the ministry's website.

Beijing calls on Washington "to immediately revoke its decision to hold a meeting between Obama and the Dalai Lama" and to "honour its serious commitment that recognises Tibet as part of China", the statement said.

"We are firmly opposed to any foreign politician meeting the Dalai Lama in any form whatsoever," it said, warning the US administration against any action that "could harm US-Chinese relations".

The authorities of communist regime, China accuse His Holiness the Dalai Lama of supporting the use of violence to set up an independent Tibet.

The Nobel Prize laureate denies the Chinese allegation and says he only seeks a meaningful autonomy for the people of Tibet that China has ruled with nearly 60 years of brutal and barbaric treatment after the military invasion of the Himalayan region.