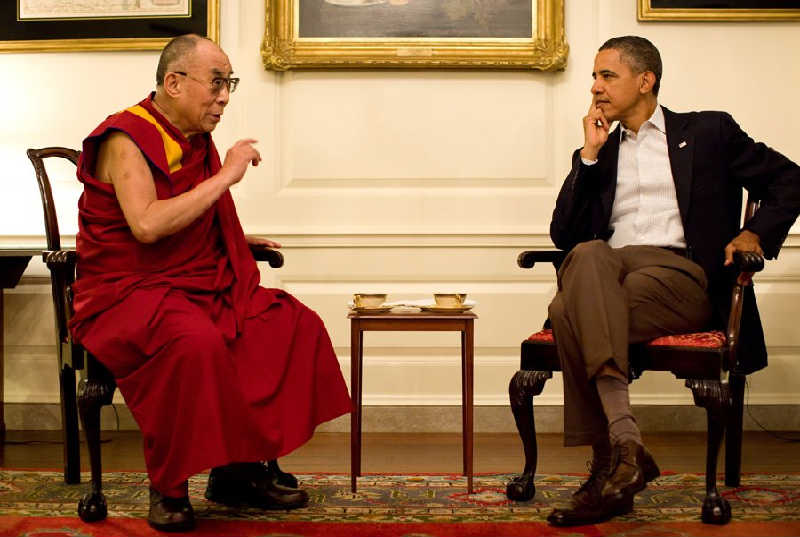 Dharamshala: US President Barack Obama received the spiritual leader of Tibet, His Holiness the Dalai Lama at the White House on Saturday, and "encourages direct dialogue to resolve long-standing differences and that a dialogue that produces positive results for China and Tibetans".

The White House issued a statement following the 45 minutes meeting between President Obama and His Holiness the Dalai Lama.

"The President reiterated his strong support for the preservation of the unique religious, cultural, and linguistic traditions of Tibet and the Tibetan people throughout the world," the statement noted.

"He underscored the importance of the protection of human rights of Tibetans in China."

"The President commended the Dalai Lama's commitment to nonviolence and dialogue with China and his pursuit of the "Middle Way" approach. Reiterating the U.S. policy that Tibet is a part of the People's Republic of China and the United States does not support independence for Tibet, the President stressed that he encourages direct dialogue to resolve long-standing differences and that a dialogue that produces results would be positive for China and Tibetans.

"The Dalai Lama stated that he is not seeking independence for Tibet and hopes that dialogue between his representatives and the Chinese government can soon resume," the statement noted.

On his return to the hotel after the meeting, His Holiness gave a brief reaction to some media personnel waiting there. His Holiness said that President Obama showed concern about basic human values, human rights and freedom. Naturally, His Holiness added, he showed genuine concern about suffering in Tibet and also other places. It was wonderful, he added.