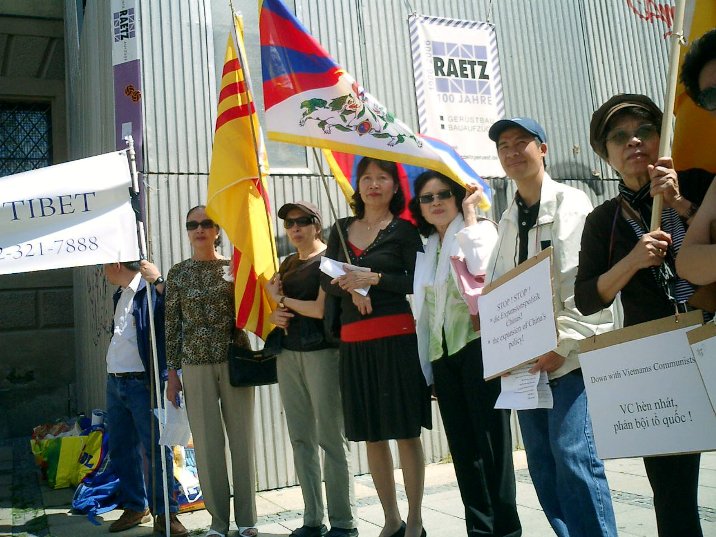 Dharamshala: - On the occasion of the 60th Anniversary of Tibet, Tibetans and Vietnamese living in Europe held a rally in Munich, Germany on July 16. According to a press release from the United Nations for a Free Tibet (UNFT), supporters rallied to raise awareness about the recent closure of the Tibetan region, the protests in Kardze and Ngaba, and China's invasion of parts of Vietnam. Protesters also gathered at the Chinese consulate to call attention to the recent propaganda drive in Tibet.

According to some reports, select foreign guests will be invited to the 60th Anniversary celebrations in Lhasa. Mandie McKeown of the International Tibet Network advised invitees, "while we deplore the closure of Tibetan areas to independent observers, we call on any foreigners invited to participate these anniversary events to stay away since their presence would represent a sickening endorsement of China's appalling human rights record in Tibet."

Ngaba has been a sensitive area since March, when a 20-year-old Tibetan monk self-immolated. Monks living at Kirti Monastery experienced a severe crackdown after this, with authorities forcibly removing and detaining hundreds. In nearby Karze, small groups, protesting for Tibet's freedom and for the long life of His Holiness the Dalai Lama, have been detained in several different incidents within the last month.

Many Vietnamese, also feeling that China is a threat to their security, stood in solidarity in protest with the Tibetans. China has occupied land along the Vietnamese-Chinese border, and they have also established control over the Paracel Islands and Spratly Islands. 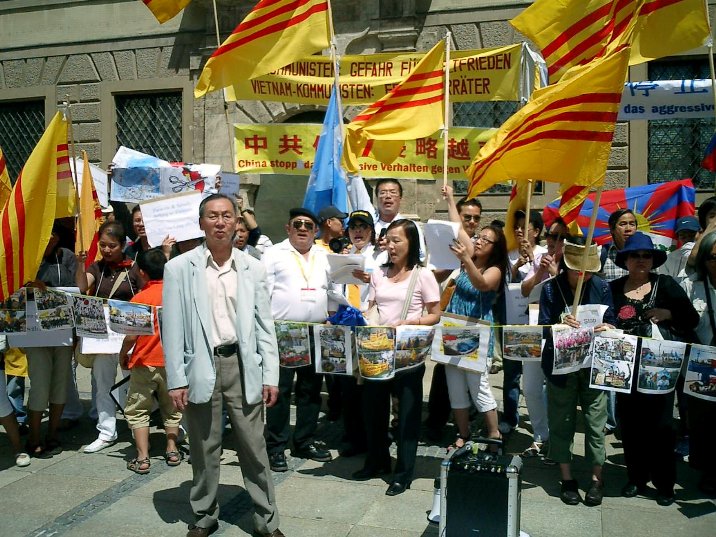 "The Vietnamese German Community...is lending the fellow people our hands by doing any possibility to protest the Chinese expansion plot," said the Free Vietnamese Community in Bavaria.

In regard to propaganda in Tibet, which has recently increased due to the upcoming 60th Anniversary celebrations, Brigitte Graefin von Bulow of the United Nations for a Free Tibet (UNFFT) said that though the Chinese propaganda is largely the same as it was many years before, Tibetans remain discontented. "China, who invaded peaceful and independent Tibet in 1949, has had 60 years to win Tibetan hearts and minds, but has utterly failed."

Other such protests will take place in Sydney and Melbourne, Australia, and in Washington, DC, USA at later times. During these protests, Tibetan, Vietnamese, Uyghur, and Mongolian people will come together to demonstrate for "Action for Tibet and Vietnam."