Details
Official Website of His Holiness the Dalai Lama 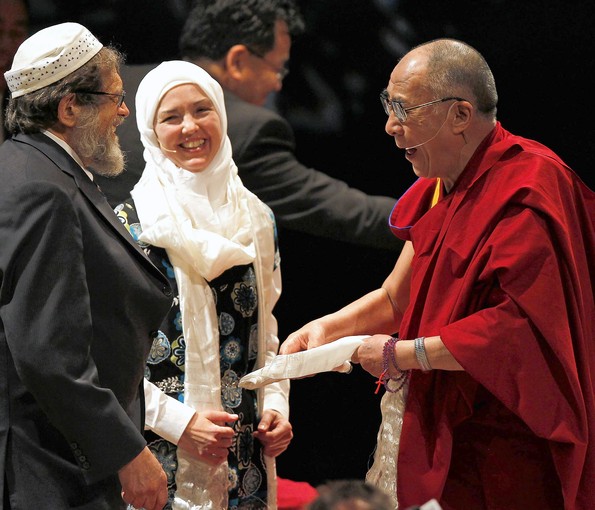 Chicago, Illinois, 18 July 2011 - On his last day of this two-city current tour of the United States, on July 18, 2011 morning, the spiritual leader of Tibet, His Holiness the Dalai Lama participated in a dialogue with interfaith leaders in a session entitled, Building Bridges: Religious Leaders In Conversation With The Dalai Lama. Hosted by the Theosophical Society and held at the Harris Theater for Music and Dance in Chicago, it was attended by a sold-out crowd of 1500 people.

Theosophical Society President Tim Boyd introduced His Holiness to the audience. He recalled the visit of His Holiness to the headquarters of the Theosophical Society in America, located in Wheaton, Illinois, in 1981. He said His Holiness had given a talk at a local school then but not many students knew who he was. Since then things have changed greatly, Mr. Boyd said adding that His Holiness has now become one of the most recognized and the most respected persons in the world. Mr. Boyd said that His Holiness's continued call for adherence to the universal qualities to bring change to human hearts and minds have made him one of the greatest teachers in the world.

Thereafter, Mr. Eboo Patel, the founder and executive director of the Interfaith Youth Core, a Chicago-based international nonprofit that aims to promote interfaith cooperation, moderated a brief session with His Holiness alone before inviting the other panelists. Mr. Patel called His Holiness as probably being the world's leading example of religious tolerance.

A short documentary on the artwork created by religious organizations about their perception of other religions was screened.

Mr. Patel then said that he would be asking His Holiness some questions, which have been compiled through different channels from different individuals. In his first question, Mr. Patel asked His Holiness the reasons that led to him adopting religious harmony as one of his commitments, in addition to the promotion of human values and resolving the Tibetan problem.

His Holiness responded that if we use common sense then it would be clear why he was stressing on the need for religious harmony. He said every day we hear news about violence, some of which are related to different religions. Having a feeling of sadness for a short moment in such situations was not the right approach. He said that while praying for the wellbeing of all sentient beings may be seen as unrealistic there was the need for considering the wellbeing of the nearly seven billion human beings on this planet. He added that there was the possibility of all people co-existing in harmony.

His Holiness referred to the harmony among different religious practitioners in India as an example. He talked about how Muslims in Bodh Gaya have friendly relationship with the Buddhists there despite the historical fact that they are descendants of people who may have been involved in the destruction of Buddhist institutions in the past. He made the case for the need of the existence of the different religious traditions to fit the different mental dispositions of the people. He talked about the projection of the entire Islamic community negatively in the wake of the September 11 incident and how he had come to defend Islam.

His Holiness stressed on the need for religious communities to be more involved with society. He praised the Christian community for their involved in the health and education sectors. He also said that Buddhist monks in Thailand and Burma were active in ecological preservation.

In response to a question on how the young interfaith leaders, who are humanists, should play their role, His Holiness talked about his commitment to promote basic human values through secular moral ethics. He said we could all work to cultivate warm-heartedness, which builds trusts, which in turn builds friendship. Saying that his concept of promotion of moral ethics was not based on religion, he said this makes it possible to easily introduce it in the education system. If moral ethics is to be based on religious faith, His Holiness said that it couldn't become universal.

Thereafter, Mr. Patel invited the other panelists to the stage. They were Rabbi Michael Lerner, founding editor of the progressive Jewish interfaith magazine Tikkun, which is dedicated to building bridges between religious and secular organizations; Dr. Ingrid Mattson, Hartford Seminary Professor of Islamic Studies and Christian-Muslim Relations; and Rev. Peg Chemberlin, executive director of the Minnesota Council of Churches.

Discussions touched on their personal experience at interfaith initiatives and the challenges they have faced. Dr. Mattson said how she was inspired by His Holiness' outreach to scientists to have a new perspective in her ethical research in schools. Rabbi Lerner said how the Buddhist concept of letting go attachments enabled him to strengthen his own faith. They also talked about how interfaith dialogue could be promoted in today's world.

Mr. Patel in his concluding remark expressed his gratitude to His Holiness for his interfaith initiatives. He said that His Holiness could have chosen to live in the bubble of his Tibetan Buddhism but he chose to learn about the best of all religions. He thanked His Holiness for setting an example.

In his concluding remarks, His Holiness said that he was not saying anything new but only being a messenger of the ancient Indian teachings. He thanked his co-panelists for their work, including one of them for highlighting women's rights.

TV Journalist Bill Curtis was the MC for this session. His Holiness then had lunch with the Reverend Jesse Jackson Sr. and some guests who had attended the dialogue.

In the afternoon, His Holiness addressed around 300 members of the Theosophical Society. He told them about his appreciation of the Society's mission. He then answered some questions before departing to the airport to begin his return journey to India.