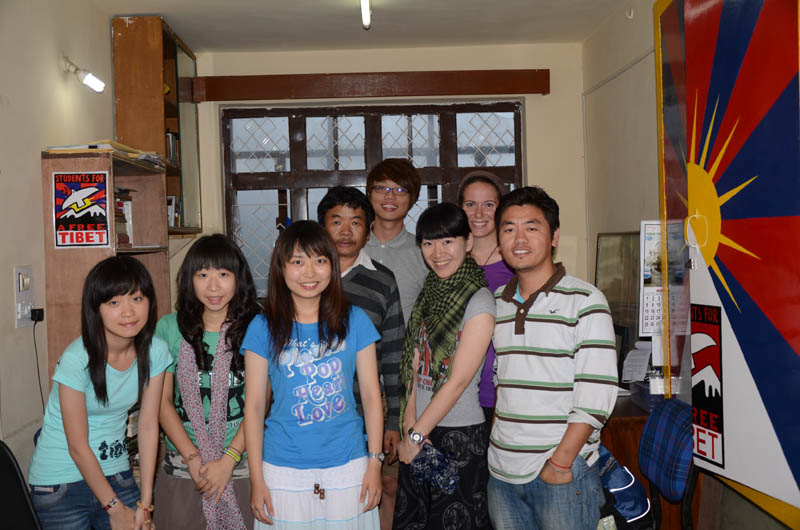 Dharamshala: - Taiwan Friends of Tibet, a group of Taiwanese university students, is in Dharamshala for two weeks to learn more about Tibetan culture and issues. The group is made up of 18 students from two different universities, two teachers, and one leader. The Tibet Post International on Friday spoke with the visiting delegation at the office of the India chapter of Students for a Free Tibet (SFT).

The group arrived on July 14, and their first week was spent visiting Tibetan Parliament in exile, Tibetan Administration bodies, non-governmental organizations (NGOs), monasteries, and schools. Some of these include the Tibetan Women's Association (TWA), the refugee reception center, and the Tibetan Youth Congress (TYC). During the second week, the students will divide into groups of two or three to do projects related to their personal interests.

"Dharamshala is the reality of Tibetan people and Tibetan culture," said student Ben Chai-Hsun Tsai. "Someone may think corruption in Tibet is the problem of the Chinese communist party. As a Taiwanese, this is not my thought." He spoke about the sensitive situation between China and Taiwan and expressed his desire for the Tibetan people and the Taiwanese people to work together.

Pai Chao-Mez said she had a Tibetan school friend with whom she had spoken to about the situation in Tibet several times. Her family is also Buddhist, so they had discussed Tibetan issues as well. Many of the students had also studied Chinese history, read books about Tibet, and participated in street protests for Tibet, so they wanted to come to Dharamshala to learn more.

Yin wen-hui, the group's leader, said that many of the students have expressed interest in continuing their work for Tibet back in Taiwan through books and journalistic media by, for example, translating accounts of Tibetan prisoners into Chinese.

This coming week, the students begin working on projects with the Tibetan community in Dharamshala. One project compares two Tibetan writers, one a political prisoner who escaped to India; the other an Indian-born Tibetan. Another involves Tibetan food and how the food reflects the culture.

A third group will compare Tibetan dancing and music in Dharamshala to the dancing and music in Tibet, looking at how Indian culture has influenced these art forms. Another will study the divide between the young generation and the more traditional older generations, looking at ways the Tibetan community here can keep their traditional culture alive. A final group will look at political and social issues as well as culture and life-stories.

The students expressed strong support for Tibet. Students had various opinions regarding Tibetan freedom; some supported a fully independent Tibet and some supported the Middle Way Approach advocated by His Holiness the 14th Dalai Lama and the Central Tibetan Administration.

Common sentiments among the group, though, were that Tibetan people should have the freedom to choose how they wanted to be governed and to retain their culture, religion, and rights. They also emphasized the importance of peace and respect. "I support free Tibet, but both ways are okay if Tibet can save their culture and their rights," said Pai Chao-Mez.

Ben Chai-Hsun Tsai expressed the opinion that China's concern is the land and the resources in Tibet; and that they therefore would not support the Middle Way Approach because it stipulates that the Tibetan people have the right to that land and to the natural resources.

"The Chinese government thinks they are helping Tibetans, but China gets more and more, and gives less and less," he said.

Chen Si-Yu said that development by the Chinese government isn't necessarily good for the Tibetan people. While they throw money into Tibet, she said, many Tibetan people are still in need.

The group encouraged the Tibetan people to keep hope, reminding them that they have supporters around the world and encouraging them to understand their heritage. Liang Pei-Yu encouraged students to "learn more about Tibet and fight for Tibet's future."

"No matter where you've been, don't forget your language, religion, history, and value system. And when you are fighting for free Tibet, don't forget to maintain peace inside," said Chu En-Cheng.

"Keep learning who you are, what Tibet is. Don't be afraid, don't give up. Your Taiwanese friends will always be with you," said Yu Wen-Hui.