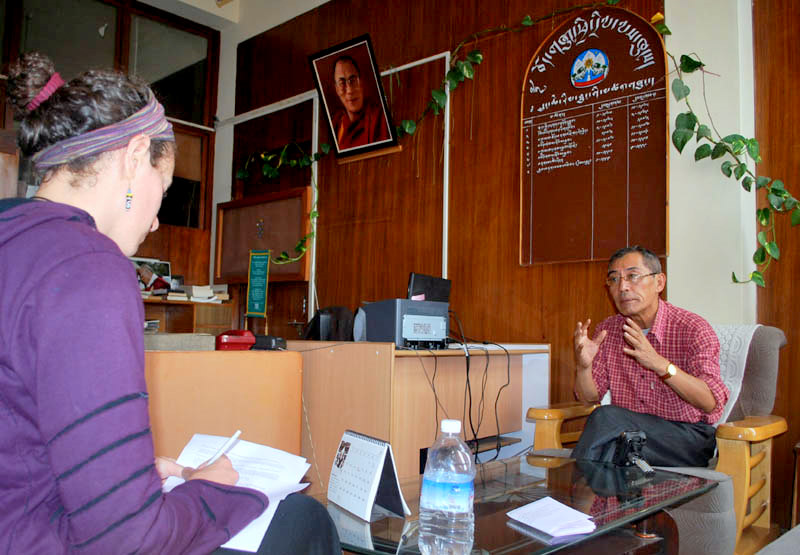 Dharamshala: China recently issued a White Paper entitled ‘Fifty Years of Democratic Reform in Tibet.' The White Paper is China's assessment of the historical relationship between Tibet and China and of the changes that have taken place in Tibet under China's rule. Among China's claims are that Tibet is historically a part of China and that Chinese rule has benefited the Tibetan people in countless ways. The Tibet Post International sat down with the Information Secretary of the Tibetan Central Administration, Thupten Samphel, to discuss the claims made by China in the White Paper.

"A distortion of history"

China's White Paper begins by stating that China has had a claim on Tibet since the 13th century. "This is a distortion of history," asserted Samphel, who said that at that time, Tibet was a part of the Monghol Empire.

Therefore, Samphel asserted, "By this origin, Mongolia has more of a claim to Tibet than China."

Regarding the Chinese invasion of Tibet in 1950, the White Paper claims that the Chinese government sent delegates to Beijing to negotiate "the peaceful liberation of Tibet." At this time, according to China, Tibetans put up an armed resistance with the help of foreign forces. Samphel said that although Tibet did appeal for the help of India, the United States, Britain, and Nepal, none of these countries came to Tibet's assistance.

"Tibet was compelled to deal with China alone and on China's terms," he said, claiming that China's 17-Point Agreement was, from the Tibetan viewpoint, "signed under duress because it was a document signed by two unequal partners." The Chinese government had given the Tibetans two choices: sign the document or face force and violence.

After the signing of the 17-Point Agreement, Samphel said that the Tibetan people made a sincere attempt to abide by the agreementand deal peacefully with China. "All of the promises made by the Chinese communist party were broken one by one. This angered the Tibetan people, so resistance spread."

"Statements do not conform to reality"

As for the situation in Tibet today, Samphel also disputed many of the claims China makes in the White Paper. The White Paper claims that "the fruits of [the Tibetans'] labor belong all to themselves."

"What's happening in Tibet is undoubted economic improvement," he said. "But the fruits of their labor are all taken away by the Chinese workers."

He said the reforms in Tibet unsettle the Tibetan people because they are imposed upon them, and do not conform to the Tibetan people's basic desires and aspirations. "They're Sinicizing Tibetan culture. When Tibetans walk down the streets of Lhasa, they think they're in another Chinatown. They cannot identify the modern transformation with the ancient, sacred city of their ancestors."

Tibetan resources, he said, are being used and taken by China, and labor is moved in from congested Chinese cities in order to balance demographics in China. He expressed agreement with the words of the late Panchen Lama in 1989, that Tibet has lost more than it has gained from China.

He said that China's claim that it is concerned about the ecological preservation of Tibet contradicts actions in China. In 1998, the felling of trees in northern Tibet caused many people to lose their lives and their property. In China itself, plans are being discussed to divert the Mekong River upstream to supply water to people in northern China. More than eleven countries south of China would be vastly affected by this move.

"The focus is on development, profit, at all costs. No one bothers to think about the environmental cost of China's really amazing economic development," Samphel said.

The White Paper also states that respect for religious belief and practice is a Chinese government policy. He said that while religious practice does occur in Tibet, many Buddhists are actually coming to Indian refugee settlements to study. "Buddhism is not just about reciting mantras and chanting prayers. It involves a thorough, endless investigation of the basic teachings of the Buddha."

The traditional way of passing Buddhist knowledge down from teacher to student has been completely destroyed under Chinese rule. He explained that historically, students from all over the Himalayan belt used to risk their lives to travel to Tibet to study.

To illustrate the extent to which this practice has been lost, he used the example of the Karmapa, who came to Tibetan refugee settlements in India to study because there were no qualified teachers in Tibet with whom he could continue his studies.

China also claims that while religious abuses have taken place in the past in Tibet, "unjust, false, and wrong cases have been redressed in Tibet and religious institutions have been reinstated or established."

Samphel said this claim has been historically distorted. When given the freedom to do so in 1980, he explained, Tibetans themselves spent their time, money, and resources to rebuild the monasteries. "They are taking the credit for the Tibetan people," he said. "It is partly true, but the interpretation is totally wrong."

The system of education, historically centered in the Buddhist monasteries and based on religion and culture, has also undergone a radical transformation under Chinese rule. Despite China's claim that Tibetan is the language of primary instruction and the main language spoken throughout Tibet, Samphel said that just last year, students in Amdo were protesting because of increasing restrictions on the use of the Tibetan language.

Citing another example, he said that on road signs in Tibet, Chinese characters are largely placed at the top with the Tibetan smaller underneath. " So you know which language has greater preference in the eyes of the Chinese authorities," he said.

"Their statements do not conform to the reality seen and experienced by the Tibetan people on a daily basis. What they say and what they do in Tibet are vastly different," said Samphel.

As for China's claims that they rescued Tibetan society from a backward, feudalistic society, he agreed that the feudal society in Tibet was not completely just and perfect. However, he said, the Tibetan people did not experience mass starvation or famine the way other societies like China and India do. "The society functioned on a more egalitarian basis," he said.

Drawing on a claim by His Holiness the Dalai Lama, he also said that His Holiness realized at a young age the importance of government reform in Tibet. The Central Tibetan Administration has undergone many reforms in regard to democracy and making the voices of people heard. His Holiness has said that without Chinese help, Tibetan society would have moved forward.

Reiterating the view that students are sent away from Tibet to India to learn about Tibetan culture and language, Samphel said that much of the history the students are taught in Tibetan schools is pure Chinese propaganda.

The history textbooks, he told, tell the Chinese communist perspective that Tibet has always been a part of China and that the Tibetan people should be grateful to the Chinese for liberating them.

It is not only the Tibetan children that are taught this, he said, but children in schools throughout China. "Many Chinese scholars, after receiving education in China, go to the west and enjoy open, unfettered access to a variety of information and versions of Tibetan history. They are totally shocked. They feel their government has lied to them."

Samphel said that His Holiness the Dalai Lama has said that if government censorship and distortion were to stop in China, the Chinese people would all agree that the Middle Way Approach was reasonable.

He emphasized that if the claims in the White Papers were true, then there would be no reason for the government to issue White Papers claiming that they are. "If things were really peaceful and bright, the whole world would acknowledge it and China would not have to waste time, energy, and resources."