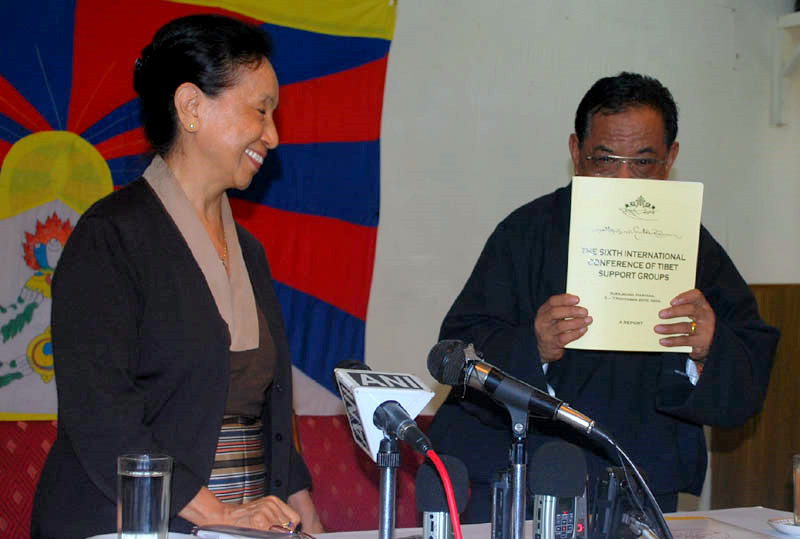 The Minister of the Department of Information and International Relations, Kalon Kelsang Yangkyi Takla, gave the press statement.

The Sixth International Tibet Support Groups (TSG) Conference, held last November in the Indian state of Haryana, was attended by 258 participants from 57 countries. His Holiness the Dalai Lama was the Guest of Honour.

The TSG Conference developed an action plan focusing on political support, outreach to China, human rights, the environment, and development.

In the press statement, Kalon Takla said, "In our view the action plan that will guide the activities and the campaigns of the worldwide TSG movement is both comprehensive and practical. It is our conviction that this action plan will galvanize and give new dynamism to the TSG movment."

The action plan contains several objectives: to increase Tibet advocacy in governments internationally, to build support for His Holiness the Dalai Lama to visit Tibet, to counter China's efforts to weaken the Tibetan language, to increase awareness of human rights abuses, to stop the damming of the Mekong River, and to foster better understanding between Chinese and Tibetan people.

Significantly, many Chinese people participated in the TSG conference, showing their solidarity with the Tibetan struggle. Kalon Takla called the Chinese involvement "a huge encouragement for both the Tibetan people and the worldwide TSG movement."

The extensive report on the conference contains the opening and closing statements made by Kalon Tripa Samdhong Rinpoche, His Holiness the Dalai Lama, and other Tibetan, Indian, and Chinese officials.

In his address at the conference, His Holiness the Dalai Lama spoke about the presence of many Han Chinese there, saying that their support was proof that Tibetans don't oppose the people of China.

"Many of the educated and intelligent Han Chinese people who are patriotic and love their culture, people, and country, even they have come to help us. This clearly shows that our struggle is just and noble," His Holiness said.

Kalon Tripa Prof. Samdhong Rinpoche expressed hope for the future in his closing statement. "The awareness and spirit of freedom, equality and justice within the mind of Chinese people have been growing very rapidly...therefore, the coming few years would be immensely important for everyone, for the world, for the humanity, of course for the Tibetans and for the other minorities within the PRC."

The report also contains briefing papers on the status of dialogue between the Chinese government and the Tibetan administration, the human rights situation in Tibet, the state of environmental issues in Tibet, ways Tibetans can reach out to Chinese people on the Tibetan issue, and using technology to advance the Tibetan cause.
The conference was organized by the Core Group for Tibetan Cause in India, and facilitated by the Department of Information and International Relations of the Central Tibetan Administration.