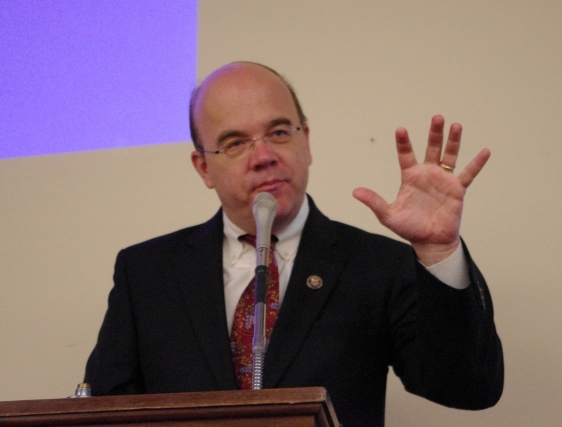 Dharamshala: - Describing the spiritual leader of Tibet, Holiness the Dalai Lama's voluntary effort to give up power as remarkable, a top US lawmaker has said it is culmination of a decades-long process of nurturing the development of democratic institutions in the Tibetan exile community.

"At a time when autocrats around the world are clinging to power, the Dalai Lama's voluntary effort to give up power is remarkable. It is the culmination of a decades-long process of nurturing the development of democratic institutions in the Tibetan exile community," Congressman James P. McGovern of Massachusetts said in a speech on the floor of the US House of Representative on Tuesday.

"This stands in stark contrast to the reality that neither Tibetans in Tibet, nor anyone in China, are allowed fundamental democratic freedoms or free elections. What the Tibetans have accomplished is worthy of our attention and respect," he said.

"In March 2011, the Dalai Lama announced his decision to devolve his political authority to the elected leadership. These changes were ratified by the Tibetan parliament in May," Mr McGovern told the House.

He further said, "Tibetans from around the world will gather for a historic occasion on 8 August 2011, the inauguration of their democratically elected Kalon Tripa, Dr Lobsang Sangay."

"On the occasion of the inauguration of the next Kalon Tripa, Dr Lobsang Sangay, I send my warm wishes to the Tibetan people and congratulate them on their democratic achievements," he added.

"Dr Lobsang Sangay takes over as chief executive of the Central Tibet Administration at a critical point, as much of the political responsibilities for the Tibetan community in exile now reside on his shoulders," Congressman McGovern said.

"I had the chance to meet Lobsang Sangay when he came to Capitol Hill in July 2011, during the Dalai Lama's visit to Washington. I look forward to his return to discuss ways the United States can help Tibetans in their endeavor to find a solution for the Tibet issue," he added.