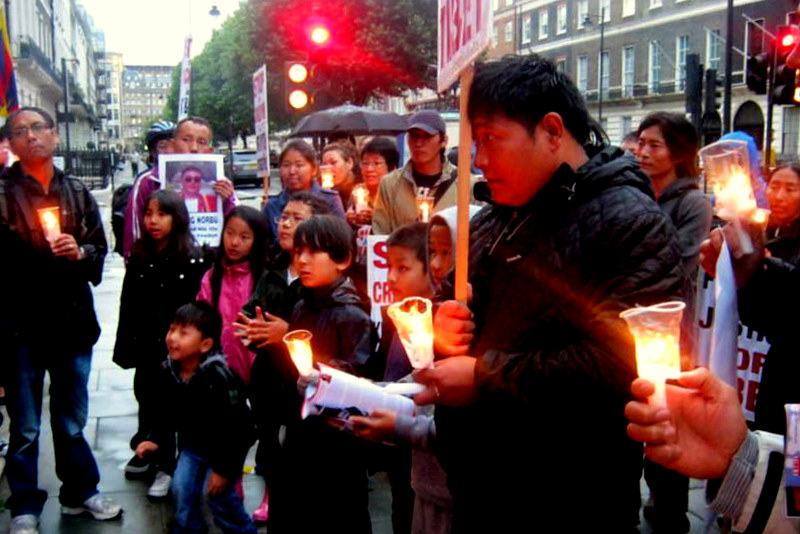 London: - In response to the self immolation of Tibetan monk Tsewang Norbu, the Tibetan community in the UK on Friday (19th August) held a candlelight vigil outside the Chinese embassy in London to mark the death of the martyred monk, and to highlight the growing human rights abuses in the region.

Tsewang Norbu; a 29 year old Buddhist monk from Tawu, Kardze county, eastern Tibet (Sichuan province), immolated himself in protest to China's oppressive policies in Tibet, at Nyatso Monastery (Eastern Tibet). He conducted the act of defiance on Monday 15th of August. His death has since been met with hostility by Chinese authorities, who have flooded the area with troops, as well as cutting all phone and internet lines. Additionally, Nyitsu Monastery is under lock-down, and close scrutiny from Chinese officials.

The peaceful vigil, which was held in pouring rain outside the Chinese Embassy on Portland Place road, London, was held by around fifty members of the community. It was hosted and attended by 'The Tibetan Community in Britain', 'Tibet Society', 'Students for a Free Tibet' and 'Tibetan Youth UK'. Members of the group held aloft candles to remember the actions of Norbu, and to show support and unity for Tibetans in Tibet.

According to Tibet Society, sources said Tsewang Norbu: 'shouted slogans including "We Tibetan people want freedom", "Long live the Dalai Lama" and "Let the Dalai Lama Return to Tibet". He also distributed leaflets before pouring kerosene over his body and setting himself on fire. He then continued to shout slogans for about 15 minutes before he died at the scene'.

London has also recently witnessed protests against China with the visit of Wen Jiabo in June. The Chinese Premier was greeted by peaceful Tibetan supporters throughout his three day tour of Britain.

The official news agency of China; Xinhua, has confirmed the incident took place. However it stated that it was 'unclear' as to why the death of Tsewang Norbu occurred.