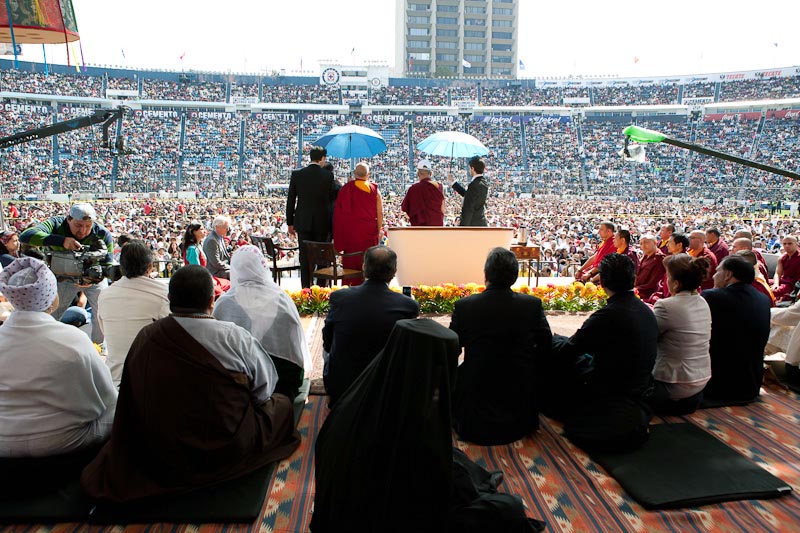 Mexico City: - Tibet's spiritual leader His Holiness the 14th Dalai Lama on Sunday, 11th September held a public talk on ‘Finding Happiness in the Troubled Times', at the Cruz Azul (Blue Soccer) Stadium in Mexico City, which are being attended by over 30,000 of people including officials, religious scholars, movie star, singers, and musicians.

His Holiness began his talk saying 'We're all equal, we all want to have a happy life, and we all have rights to be happy.' His Holiness spoke for more an hour standing, as enthusiastic crowd of 30,000 people listened attentively to his talk despite strong sun in the early morning. Later, His Holiness attended to the questions from the audience.

When asked to comment about Mexicans carrying Tibetan Flag, His Holiness said that in 1954 when he visited China and met with Chairman Mao Tsetung, he was told by Mao that Tibet had its own flag and Tibetans should use it. So if people complained about displaying Tibetan flag, His Holiness told the crowd, you should tell them that even Chairman Mao had no objection to displaying the flag. As His Holiness narrated these words, all the people carrying small Tibetan flag raised the flags in the air.

At the stadium, massive banners reading 'Mexico loves Tibet' hanged from the awning of the soccer teams' benches and thousands of people were carrying small Tibetan flag drew attention of the media people.

Later when His Holiness concluded his talk and when a host of the event delivered his thank you remark, the crowd recited in unison in Spanish a popular long-life prayer for His Holiness the Dalai Lama, which says: "In this land surrounded by mountains of snow; You are the source of all solace and joy; All powerful Chen-re-zig, Tenzin Gyatso; Please remain until samsara ends."

This was followed by the musicians of the traditional Mexican songs ‘Mariacha' coming up on the stage and played a very emotional farewell song for His Holiness the Dalai Lama. The crowd also joined in singing the song.

Before he left the stage at the stadium, His Holiness had a group photo with the members of the Religious Council of Mexico City as well as with the musicians of the Mexican traditional song.

In the afternoon, His Holiness departed for Leandro Valle Culture Center, where addressed the Mexican educationists on "A Holistic Approach: Sharpening the Mind, Nurturing a Good Heart". This high profile talk was attended by one thousand members of the Union of Education Workers in Mexico. The talk was simultaneously telecast all over Mexico by Azteca TV.

After completing his three days visit to Mexico, His Holiness will depart tomorrow morning to Buenos Aires, the capital of Argentina, where he has two-day programme.