Details
Office of His Holiness the Dalai Lama 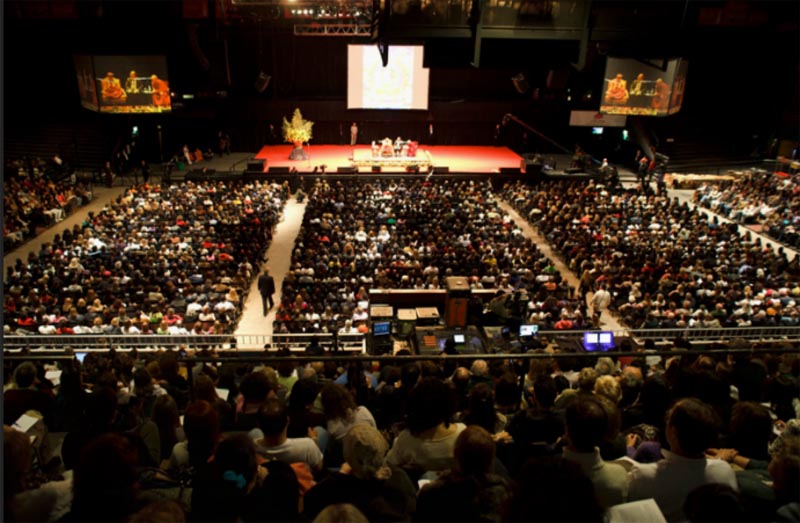 Buenos Aires, Argentina: Tibet's spiritual leader, His Holiness the Dalai Lama on Wednesday morning gave an interview with Ms Susana Giménez, whose programme is considered one of the best in the history of television in Argentina.

During the interview, His Holiness dealt with various questions wide ranging from ethics and morality, social problems including wide spread corruption, role of media in mitigating social problems, and retirement of the Dalai Lama etc. Her interview with His Holiness was telecast this evening.

After the interview, His Holiness departed for Luna Park Stadium, where he gave a public talk on "Finding Happiness in the Troubled Times' for 6,500 people.

His Holiness spoke for one and half hours on the topic and then took questions from the puiblic. Among the audience, not only there were people from all walks of life in Argentina, but also from Chile and Uruguay, who came all the way from these countries to attend His Holiness' events in Buenos Aires. Several disabled people on wheel chair as well as others who have hearing and speech problem also attended the talk. The host organisations have arranged a special sign language interpreter for those with hearing and speech problem.

His Holiness was deeply moved and encouraged by the amount of attention people paid to his talk. The event was also web cast and and watched by 6,554 people.
In the afternoon, His Holiness returned to the same Luna Park Stadium and gave Seven Point Mind Training composed by Geshe Chaykawa. The teaching was also attended by 6,500 people.

For almost an hour and half, His Holiness spoke about mind training in general and later went through the text of Seven Point Mind Training composed by Geshe Chekawa in 12th century and explained the meaning of each and every sentences.

Since the audience paid exceptional attention and shown great enthusiam to his teaching, His Holiness went beyond the stipulated time to take questions from the audience.

At the end of his teaching, Lama Rinchen, an Argentinean Buddhist who represented the host organisations, thanked His Holiness for visiting Argentina and sharing his valuable messages. She also informed the audience that surplus money from the organisation of His Holiness the Dalai Lama's visit to Buenos Aires will be contributed to three Argentinean non-profit organisations involved with the social works- La Red Solidaria, Conin Foundation, and Los Piletones-and the Dalai Lama Trust based in New York.

As His Holiness departed from the Stadium, the audience gave him an emotional farewell by shouting ‘Long Live His Holiness the Dalai Lama' and many came outside of the stadium to wave at His Holiness' motorcade.

His Holiness the Dalai Lama will fly tomorrow morning to Sao Paulo, where he has a programme tomorrow afternoon to address the industrial and business leaders of Brazil