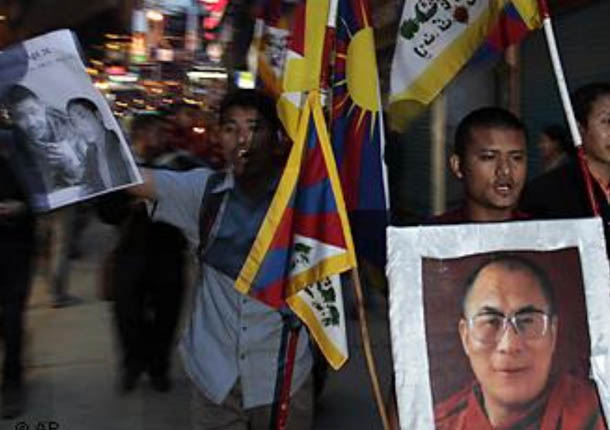 Bonn, Germnay: - There is rising concern about a spate of self-immolations among Tibetans monks and nuns protesting against Beijing's policies in Tibet. Germany and the US have called on China to respect religious and cultural identity.

Just a few days ago, a young nun set herself on fire in protest against China's policies in Tibet. Tenzin Wangmo, who was 20 years old, died of her injuries shortly afterwards. She became the ninth Tibetan in Sichuan province to commit self-immolation this year and the first woman. According to the organization Free Tibet and the International Campaign for Tibet, five of them at least have died.

"There have been calls for the return of the Dalai Lama, for religious freedom and for freedom for Tibetans in Tibet," Kai Müller from the International Campaign for Tibet told Deutsche Welle, adding that five of the self-immolations occurred in October alone.

Free Tibet said in a press release this week that Tenzin Wangmo had killed herself in protest against two Tibetans being shot by Chinese security forces. It pointed out that the incident was not isolated and that self-immolations were being used increasingly to protest against Chinese policies in Tibet.

On Friday, a German foreign ministry spokesman told reporters that the German government was appealing "to China to change its policy in Tibet to reduce tensions." Berlin has already called on Beijing to ensure greater transparency over the situation at the Kirti monastery in the city of Ngaba, which has been under virtual lockdown since a young monk named Phuntsog set himself on fire in March. The incident sparked mass protests and led to a police crackdown. There is now a significant police presence in the area and according to Free Tibet and the International Campaign for Tibet several monks from the monastery have been detained by the authorities.

On Wednesday, the US State Department expressed similar concerns about the reports that a Tibetan nun had set herself on fire. "These acts clearly represent anger and frustration with regard to Tibetan human rights, including religious freedom, inside China," its statement read.

The Chinese government has accused exiled Tibetans of encouraging the self-immolations, and said they are "terrorism in disguise." It says the "Dalai group" has "played up such issues to incite more people to follow suit," beatifying instead of criticizing the protests.

"We don't encourage these really drastic and desperate acts, but at the same time we understand the motivation behind them," responded Thubten Samphel, a spokesman for the Tibetan government-in-exile.

Meanwhile, Lobsang Sangay, the prime minister of the government-in-exile, paid tribute to the "courage" of the nine protestors and said exiled Tibetans "stand in solidarity with their indomitable spirit."

Tsegyam, the head of the China Desk at the Private Office of the Dalai Lama, told Deutsche Welle that the Tibetan spiritual leader, who has condemned self-immolations in the past, would not hold a public speech about the incidents, and would instead call on Tibetans to fast for a day in solidarity and protest.