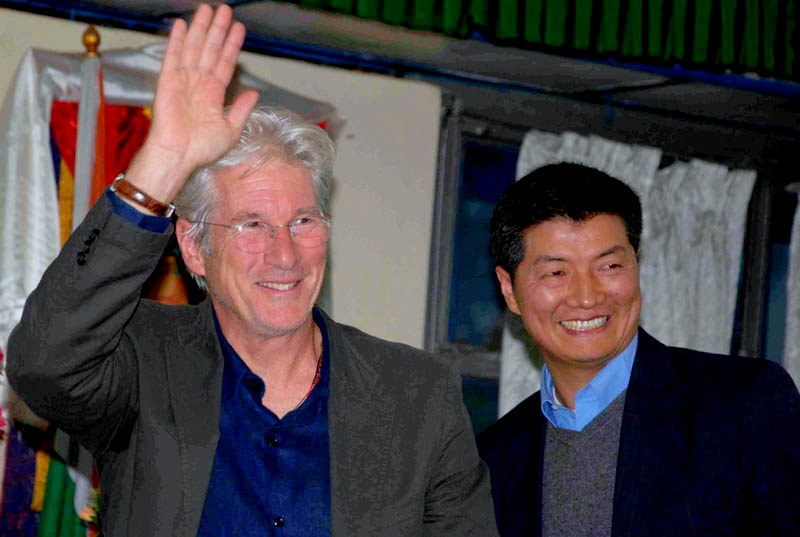 Dharamshala: - The measureless and azure skyline above the mighty Dhauladhar mountains that ringed Dharamsala town glowed with a rainbow of flying paragliders. For the gliders, the weather and spacious sky are always encouraging and delight, and which are key to successful flying to their destination.

Meanwhile, the earth in Dharamsala glowed with a celestial star of Hollywood. And for the Tibetan community, Richard Gere brings message of encouragement and support towards their struggle. It was a double delight for the staff members of the Tibetan administration as Mr Gere interacted with them on a range of Tibetan issues.

The staff members gave a thunderous applause as he walked into Gangkyi auditorium accompanied by Kalon Tripa Dr Lobsang Sangay.

Dr Sangay described Mr Gere as a weather-tested friend, who though born as an American, is very much Tibetan in heart. His passion for Tibet is well-known to the extent that it jeopardizes his film career with a semi-ban on his visit to China. Dr Sangay said the Tibetans have always been very grateful to him for putting his Hollywood career at risk.

Recounting how he came into contact with the Tibetan cause, Mr Gere said his curiosity and quest for happiness landed him at a small Tibet hamlet in Kathmandu in 1970.

Later, noted writer John F Avedon who wrote "In Exile from the Land of Snows" raised my passion to go to Dharamsala to know more about Tibet, he reminisced.

"It struck me very deeply when His Holiness the Dalai Lama told during our first meeting that the Tibetans need help and that especially from the Western friends," he said.

He said the Tibetan people have won deep and heartfelt friends across the world for contributing greatly through their rich culture and religion. "We consider you as the best of who you are. We can never repay what Tibetans have contributed to the world," he said solemnity in his voice.

On asked if he is seeing any changes in forward movement of the Tibetan issue, he said it is of paramount importance to keep the community united. The hearts of the Tibetan people have remained unchanged. The three generations of Tibetans have done very well, especially in education and health, he added.

Responding to a question on the previous performances, Mr Gere applauded the administration for making great strides in the fields of micro finance, education, health and communications.

He, however, said the failure is in Tibet. So we should to improve the lives of Tibetans in Tibet, he added.

To another query on what is the Tibetan movement's strength, he said "every staff of the administration has to step up to offer their strength and work together with the Kashag. All of you have a heavy responsibility to shoulder."

In conclusion, Kalon Tripa Dr Lobsang Sangay said Mr Gere saw the preciousness of Tibet, acted on it and became a foremost Western friend to play a pivotal role in internationalizing the Tibetan freedom struggle.

"In the time of crisis, the Tibetan people have a man to bank on," said Dr Sangay as the auditorium once again reverberated with thunderous applause.