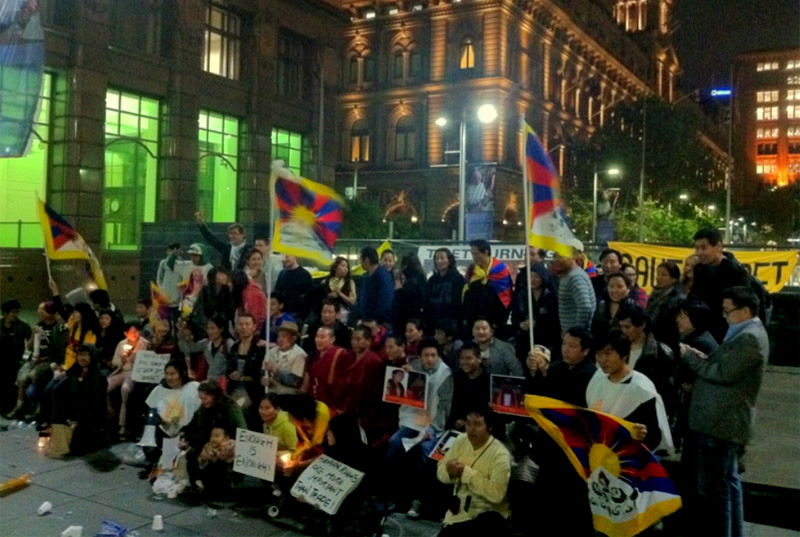 Melbourne: Tibetans in Sydney, Australia have successfully staged a peaceful candlelight vigil and protest two nights running this week in the city centre. On Wednesday night (Oct 26) the crowd gathered in Martin Place and held a vigil for the list of Tibetan monks -and as of last week, one nun- who have self-immolated this year in order to draw global attention to the deteriorating situation inside Tibet. This was followed on Thursday by a demonstration and candlelight vigil outside the Chinese consulate.

Unfortunately, due to a rumour that the proper permission had not been obtained for Sydney's vigils, much of the Tibetan community and many of its supporters did not manage to attend, however the turnout was still surprisingly good and it is believed that support for the Tibetan cause in Australia is growing as public awareness increases and many within the nation become progressively more wary of their aggressive Chinese neighbour.

Vigils and demonstrations were also held in Melbourne over the past two weeks and have occurred globally in response to China's tightening of Tibetan borders and information passing in or out of the region, which it has been occupying with a brutal iron fist since shortly after the communist takeover of China in 1949. Recently the Chinese government has gone as far as to claim that only the communist regime, for whom religion has long famously been considered 'poison', has the power to designate the next reincarnation of the Dalai Lama, a claim that has so far only managed to expose the party to ridicule both in Tibet and abroad.

Beijing stubbornly refuses to allow Tibetans religious freedom or the 'autonomy' that was promised to them following the Chinese invasion that drove the Dalai Lama into exile in India. Chinese population and environmental policies have also had a devastating impact on Tibetan language and culture, while Chinese companies have pillaged Tibet's valuable natural resources and taken over the local economy.

A total of 10 Tibetan monastics have this year made this ultimate sacrifice while shouting free Tibet slogans and calling for the return of their spiritual leader, the Dalai Lama, while many have 'disappeared' or been tortured and hundreds of others have been detained by authorities.

The following is the full press release for the Sydney vigils, circulated 27th October 2011:

Yesterday saw Tibetans and their supporters hold prayers and a candlelight vigil in Martin Place for the young Tibetans in Tibet who have self immolated to draw world attention to the plight of Tibetan people.

Since March this year, ten Tibetans, nine monks and one nun, have turned themselves into human torches, to face death in the most agonizing way, by pouring petrol over themselves, then setting themselves on fire, as a last act of desperation to call for international help for Tibetans inside Tibet. Five of them are dead. The welfare of the others is unknown. Their names are listed at the end of this media release.

The devastating situation in Tibet is getting worse. Monasteries are being subjected to military siege, monks and nuns are being "re-educated" or imprisoned for their religious beliefs, food supplies have been restricted, and Tibetan culture generally is being systematically eradicated to be replaced with Chinese language and culture. His Holiness the Dalai Lama has still not been able to return to his homeland in Tibet, to the Potala in Lhasa, and this is a major cause of resentment amongst most Tibetans. For Tibetans, this on going situation is a tortuous genocide of their faith, their culture, their language and their environment.

Tibetans and their supporters all around the world have held prayers, protests, hunger strikes, anything using peaceful means, to call world attention to their plight. However, the international media coverage on recent developments in Tibet has been very scant. Why is this so? The silence is deadly. Last night's prayer vigil in Martin Place was the first public event in Sydney, the second will be tonight outside the Chinese Consulate at Dunblane Street in Camperdown between 6.00pm to 8.00pm.

Last night was a somber event, with many young speakers from the Tibetan Youth event organizers, who spoke about their solidarity with the Tibetan youth inside Tibet who had taken such drastic measures to call for help for their fellow Tibetans. The prayers were led by Sydney Buddhist monks, and the event was attended by representatives of the Tibetan and Chinese Friendship Association, who also gave a heartfelt speech. Tibetans turned out in force to call for international help before any more Tibetans resort to such desperate measures.