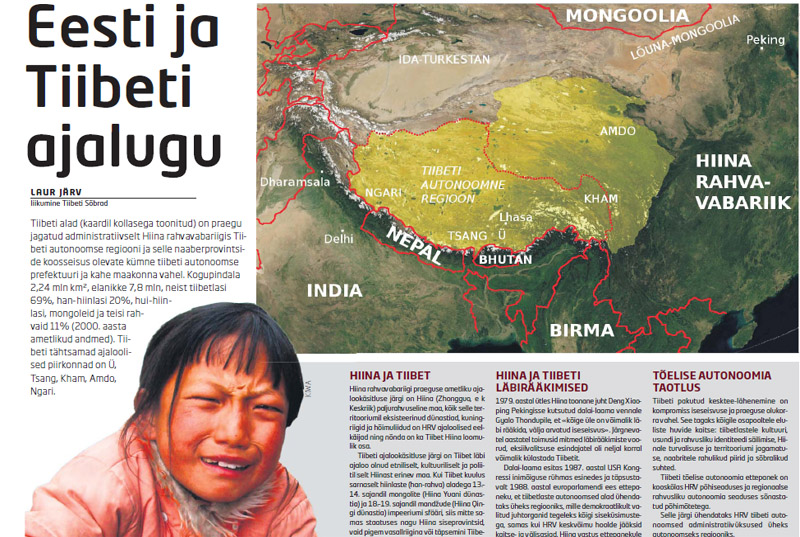 Tallinn, Estonia: On October 25 The Voice of Tibet, newspaper of the Central Tibetan Administration, was published in Estonia that includes articles by Tibetan and Estonian politicians, opinion leaders and authors as well as news, analyses and cultural texts. It was published as a supplement to Postimees, largest Estonian daily.

Postimees had previously on September 9 printed a propaganda paper of the People's Republic of China, causing a public outcry in Estonia and abroad. The Chinese propaganda paper was printed soon after the third visit of His Holiness the Dalai Lama to Estonia that had taken place in mid-August.

The editor-in-chief of The Voice of Tibet, Estonian writer and activist Roy Strider said that the newspaper was not published to engage in information warfare with the Chinese authorities. "After the end of the Soviet occupation freedom of speech has been well-respected in Estonia and just as people everywhere the Estonians seek truthful information from the media," Strider explained.

"The incident concerning the Chinese propaganda paper irritated the Estonian society and evoked a societal demand for more objective information. The first number of The Voice of Tibet concentrates on introducing the history and current situation in Tibet as well as the Tibetan cause."

The 56 000 print copy newspaper includes the contributions of the Prime Minister of the Central Tibetan Administration Dr Lobsang Sangay; Member of the European Parliament and former Estonian Minister of Foreign Affairs Kristiina Ojuland; Representative of His Holiness the Dalai Lama Thubten Samdup; lecturer of Oriental studies of the University of Tartu Dr Märt Läänemets and of Laur Järv, doctor of physics.

The newspaper printed the testimony of the missing monk Jigme, who had been tortured by the Chinese authorities, and the poems of Bhuchung D. Sonam and the well-known Tibetan dissident Woeser.

Estonia was occupied by the Soviet Union in 1940. The small Eastern European state managed to shake off the yoke of the big neighbour non-violently and restore her independence only in 1991. The People's Republic of China occupied Tibet in 1950 and rules her territory with an iron fist and in disregard of human rights.

Despite the long-standing protest of Tibetans and the international community there has been no progress in settling the Tibetan question. The Chinese authorities threatened and imposed sanctions against Estonia after the visit of the Dalai Lama in August. The Chinese authorities, who previously had tried to ruin the visit, subsequently refused the visas to the rector of the University of Tartu and a number of Estonian ministers planning an official visit.