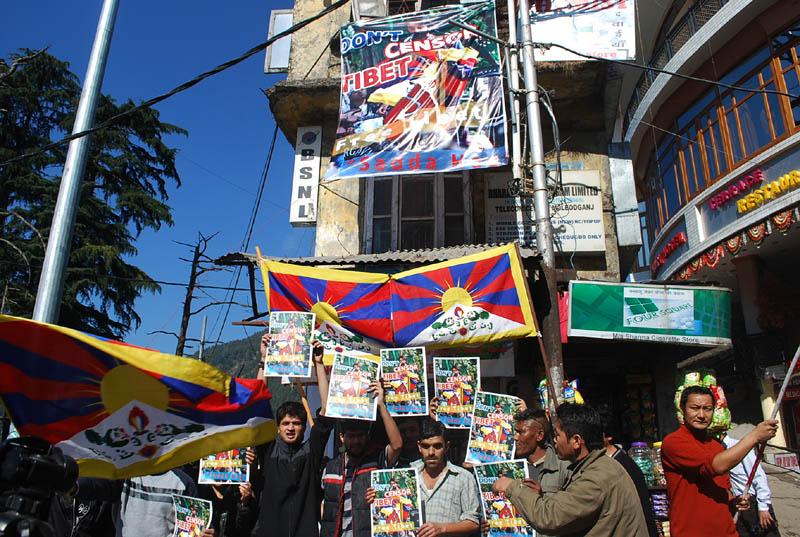 Dhramshala, India: - Amidst news of an alarming rate of self-immolations and negotiations with world governments, the Tibetan cause has seeped through the woodwork and found its way to the big screen in India. Recently, Bollywood director, Imtiaz Ali, found himself under fire by the censor board for the inclusion of a 'Free Tibet' flag in a song from his upcoming movie, 'Rockstar', starring Ranbir Kapoor. A seemingly nonchalant plot about a boy's journey to stardom, has now turned political.

The song, 'Sada Haq', in which the Free Tibet flag was featured, was shot at Norbulingka monastery in McLeod Ganj, the seat of the Tibet government in exile. The Censor Board of India has demanded that visuals of the flag be eliminated or blurred out before its release next week. Ali has since made the required deletions, affording the film a UA rating, confirmed the CEO of the Censor Board.

The issue had been put to rest in the film industry, but unrest has ensued in Dharamshala as a result of it. Activists with Students for a Free Tibet India have planned rallies and demonstrations in Delhi, Mumbai, Chennai, Bangalore, Calcutta to protest the grossly unfair censorship of the movie's support of Tibet.

Just this morning, Dharamshala saw a hearty demonstration of activists bearing posters that read 'Don't Censor Tibet, Free Tibet!' Referring to Indians as brothers and sisters, the orator at the protest called upon Indian people to raise their voices against this injustice, and take it upon themselves to help save Tibetan lives. "For Indians, it is a matter of free speech, a matter of freedom of expression, but for Tibetans it is a matter of survival".

"It is extremely disturbing that such a grotesque violation of free speech is occurring in the world's largest democracy", remarked Dorjee Tseten, National Director of Students for a Free Tibet- India. "By caving in to Chinese pressure, the Censor Board is allowing China to threaten the freedom and liberties that Indians enjoy".

He added, "Tibetans are dying for freedom. In the last eight months, eleven Tibetans in Tibet have set themselves on fire in protest of Chinese rule. At this critical time- when Tibetans are suffering so desperately under Chinese repression- one would expect India to be promoting and protecting the Tibetan people's basic human rights, not censuring their struggle in a free country, simply because China demands it.."

Dorjee Tseten is attempting to secure a meeting in Bombay, tomorrow, with the Censor Board's CEO, Pankaja Thakur, to demand that the censorship is revoked before the release of the film on Friday.