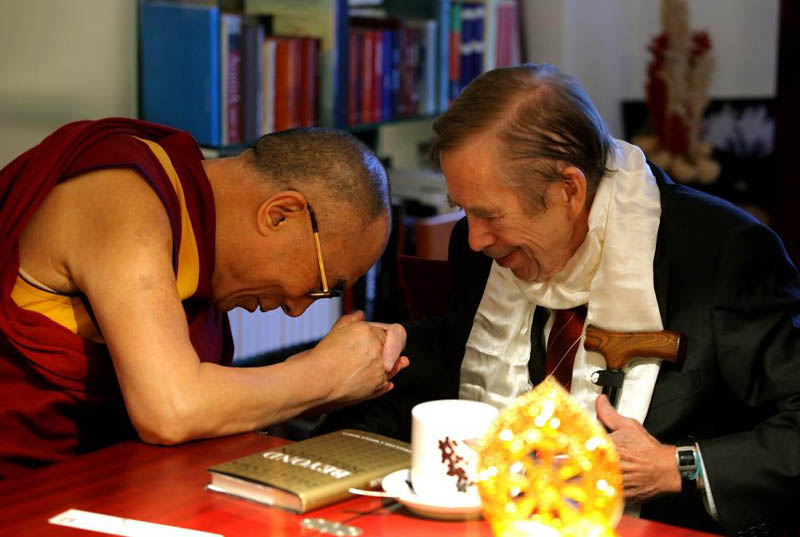 Dharamshala, India: - The spiritual leader of Tibet, His Holiness the Dalai Lama Monday, (December 19) expressed his sadness over the demise of the former President of Czech Republic Vaclav Havel and has conveyed his deep and heartfelt condolences to the late leader's family members. The former Czech President Havel, one of the leading anti-Communist dissidents of the 1970s and 1980s, has died at the age of 75, his spokeswoman announced Sunday (December 18).

Vaclav Havel on many occasions raised his voice over Human Rights violations in Tibet and expressed his support for Tibetans and His Holiness the Dalai Lama's Middle-way approach to solve the issue of Tibet.

In a message to to Mrs. Dagmar Havlova, wife of the former Czech President, Vaclav Havel, Holiness said "I am deeply saddened to learn of the passing away of my dear friend, President Václav Havel earlier today. In his death the world has lost a great statesman whose steadfast and unflinching determination played a key role in bringing freedom and democracy to the then Czechoslovakia."

"For me personally, I will miss my dear friend for whom I always had the greatest admiration and respect. He was an unassuming and a courageous leader. "I pray for him and offer my heartfelt condolences to you, other members of your family and those who were closely associated with him."

"I first had the privilege of meeting President Václav Havel in February 1990 -months after he became President following the Velvet Revolution, which he led with an extraordinary display of people power. Over the ensuing two decades I had the opportunity to meet with him regularly, most recently in Prague on December 10 - the anniversary of the Universal Declaration of Human Rights. said His Holiness.

"I deeply appreciated his kindness in keeping the time for our meeting despite his failing health," His Holiness added.

"Perhaps the best tribute we could honour and remember him is to work as best we can towards building a more peaceful, open and just world," the Tibetan spiritual leader further added.

"Vaclav Havel left us today," Sabina Tancevova said in a short statement on Havel's website. Havel, a puckish, absurdist playwright turned political activist, spent four and a half years in prison for opposing Czechslovakia's Communist government before emerging as a leader of the Velvet Revolution that swept it aside in 1989.

He went on to become president of Czechoslovakia, and of the Czech Republic when the country split in two at the end of 1992. He died peacefully in his sleep Sunday morning in the presence of his wife, Dagmar, Tancevova said.education (which he did in 1954).