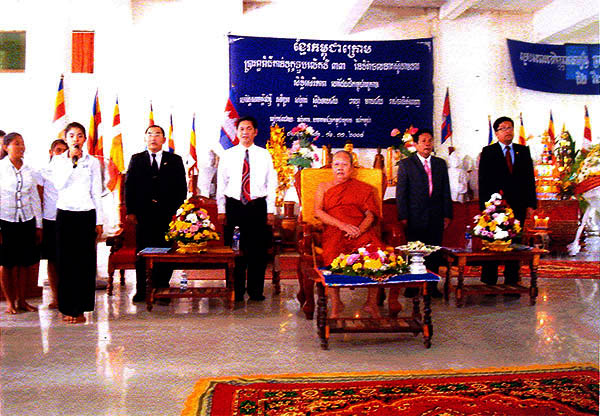 Dharamshala, India: - A group of parliamentarians of Cambodia has made a strong call for an end to the human rights violations in Tibet, urging China to engage in sincere dialogue with the Tibetan side to resolve the issue of Tibet.

"It is with a strong sense of unity that we Cambodian parliamentarians support the recent move by British Parliamentarians to halt the continuing injustice in Tibet," noted a press release issued by three MPs, Son Chhay , Cheam Channy and Yont Tharo from the opposition Sam Rainsy party.

Expressing serious concern over the recent spate of self-immolations in Tibet, the MPs said, "these acts of self-immolation make sense when one considers the decades of repression, intimidation, fear, and violence that Tibetans have endured daily under China's rule which only appears to be worsening."

"Knowing that torture is in store for them in Chinese prisons, and that they cannot depend upon any judicial process, Tibetans are now choosing to burn themselves alive. The Dalai Lama himself noted how these incidents of self-immolation reflect a sign of deep desperation," they added.

The MPs stressed that the Chinese officials should review their past ruthless actions and policies on Tibet.

They strongly disapproved of the Chinese move to force Tibetans under 18 years of age to attend government schools, imposing fines of 3,000 yuan on a single child if he was to become a monk or study at monastery school.

"China needs to realise that it will be unable to change Tibetans' hearts and minds," the Cambodian MPs said.

"We demand that the Chinese Government must immediately put an end to its oppressive policy and human rights violations, and begin sincere dialogue with the Dalai Lama," they said.

"The international community must take note of what is happening because it is clear the Tibetans are using desperate measures to draw our attention to their suffering. Further repression by the Chinese will only lead to further instability. A new year 2012 is emerging and this is an opportune time for us to encourage China to begin a new dialogue with Tibet," they added.