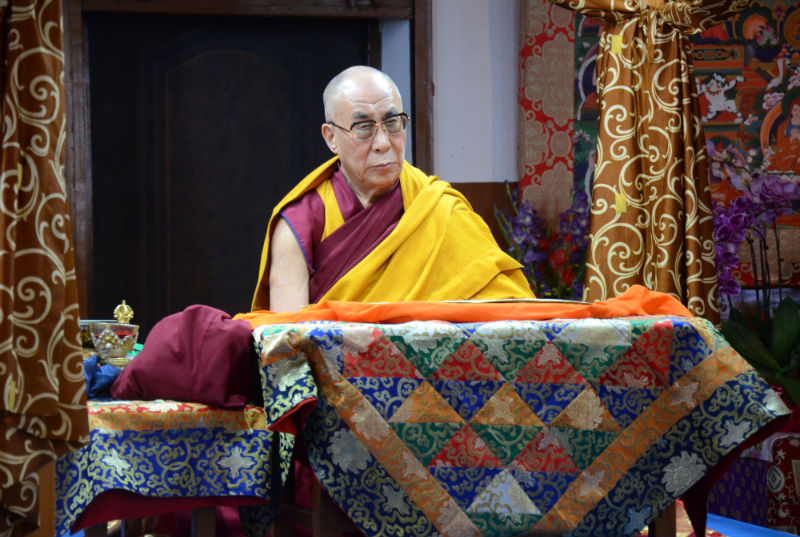 Bodhgaya, India: - The spiritual leader of Tibet, His Holiness began the Kalachakra Teaching Sunday at Kalachakra Ground at around 01.00 in the afternoon. It was his first day of the 10-day teaching and initiation of Kalachackra at the Bodhgaya, one of India's holiest site of Buddhist followers.

The preliminary initiation was started with chanting of the 'Heart Sutra' into different languages including Sanskrit, Pali and Tibetan.

Buddhism and Material world
His Holiness the said that material development alone can not improve happiness in the society. "Since the end of 2oth century, all kind of changes are going on in the world, so far people focus on the material development instead of understanding the reality- interns of material world, But people be aware that only material development can not gives real happiness. Therefore, they started to checking interest in being intention to system of mind, even among scientists, particularly neuroscientists who started some researches on the relationship between mind and neurons."

New Year Greeting from His Holiness
"This particular place, Bodhgaya is considered as a very sacred place of all followers of Buddhist traditions, who come here to worship," the Buddhist leader added. "There is a saying, if you received Kalachackra initiation in Bodhgaya, it is equal to receiving Kalachackra initiation for seven times," His Holiness told the crowd.
During the teaching, His Holiness the Dalai Lama has greeted New Year 2012. "So many people gathered here, all came here by passing all difficulties, for your efforts and hard-work , I would like to greet you all, then coincidentally, today is 1st January of 2012, I would like to wish you a happy new year."

Main Kalachackra Disciplines For Tibetans from Tibet
Over eight thousand Tibetans from Tibet are attending the teachings, please raise your hand people who came from Tibet, His Holiness asked. "There are quite many of you," he said. "Of-course we do not meet often and have this kind of interaction, specially inside Tibet. Tibetan Buddhism is lockout by Chinese authorities, they feel rather uncomfortable over Tibetan religion and language. However, you all came through the most difficulty and challenge, therefore, you are the main disciplines for this Kalachackra initiation.
On Saturday His Holiness Dalai Lama told reporters that people coming from Tibet would have "time to study and reflect" during the religious festival. His Holiness added that he and Tibet represented truth and the truth would always prevail.

World Peace and Buddhism
Preliminary session of the 32nd Kalachakra began with His Holiness praying for world peace and urging Buddhists who have assembled here from across nations to "use your 10 days to study Lord Buddha and understand Buddhism. We are blessed to be at his land."

First day of the teaching witnesses an unexpected rain whole day. Despite that, thousands of monks and common people braved the wet weather, and had crowded the ground since morning to attend His Holiness' teaching. The devotion and the spirit of masses are at peak.
During the teaching, His Holiness the Dalai Lama greeted New Year 2012. His Holiness will give Kalachakra Initiation from January 01-09, 2012, which will be concluded with a Long Life Empowerment for public and a Long Life Ceremony for His Holiness the Dalai Lama the following day.