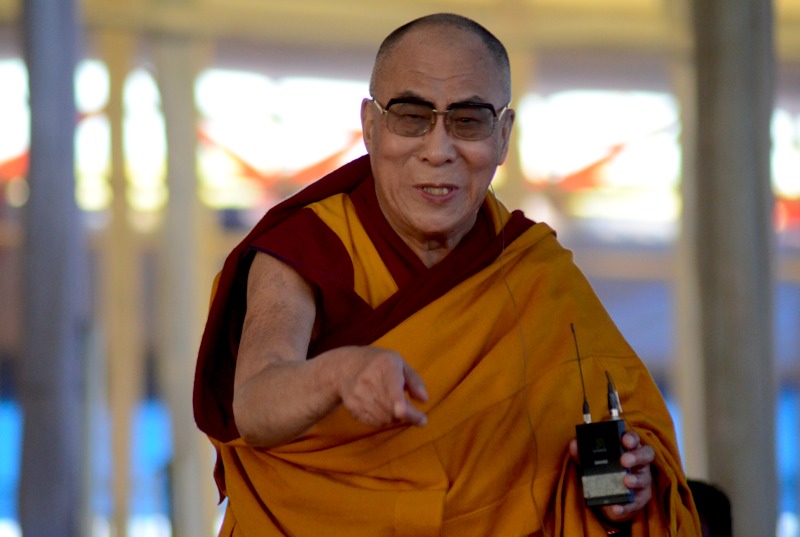 Bodhgaya-India: - To have a happy and peaceful life, the material development and inner-spiritual practice must goo hand in hand, His Holiness the Dalai Lama, the spiritual leader of Tibet on Wednesday told foreign devotees who are attending the 32nd Kalachakra Initiation for world peace at Bodhgaya.

"Everybody has desire to have happy life, and less problem, His Holiness the Dalai Lama told foreign devotees from 63 countries. "The 7 billion people, each and everyone has every right to achieve happy and successful life, less problem, this is our fundamental right," His Holiness added.

"It is difficulty to meet often, as today you are quite big number here, so I would like to say hello to all of you. I already met with brothers and sisters from mainland China, Himalayan regions, and of-course people who newly from Tibet yesterday."

"Tibetan spiritual leader said that the seven billion human beings, mentally, emotionally, and physically, we are same, the simple reason is, the way we born and die, no differences to all, whether easterner or westerner.

His Holiness said that people concerned more about material facility in the past times, because of the physical level; the hunger and decease are immensely effected, more concerned, so we concentrate more on material development and technology as well as education, it is right and important.

Later part of the 20th century, more and more people began to realize the real happiness and sensation, which very much depended on mental level. Obviously those People who have material facilities seem very comfortable life, but, life remained fear and some kind of frustration due to lack of inner spirit, these create anger, hatred and loneliness, also among the rich people such billionaires."

There are two factors in the later part of 20th century, one is more materialized life, instead of solving the problem, sometimes it is increasing and become unhappy. Another is the scientific research work, some top scientists who are really sharp minded now became to realize emotions and mind, I think this is something very important factor for happy life of any individual, family or a community, there is no differences to all; whether rich or poor and educated or uneducated once, unless the peace of mind."

"According to ancient Indian traditions including Buddhism, where there is practice of single pointed mind and penetrating-inside, initially there is more information about emotion and mind," Buddhist explained.

His Holiness expressed that scientists should research more on world of emotion and mind. He pointed-out that these days medical scientists began to take interest; how to develop cam-mind. So, I think it is very important, His Holiness added.