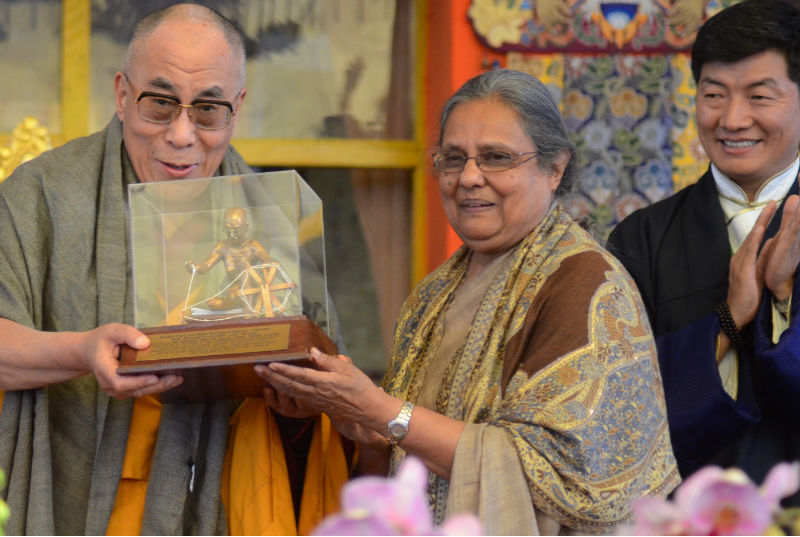 The Tibetan Nobel Peacce laureate, whose efforts towards peace building have been lauded world over is currently in the city for the annual Kalachakra teachings.

The Gandhi Award for International Reconciliation and Peace which was supposed to be conferred upon the Dalai Lama in South Africa, last year could not happen owing to the visa issue which had made the latter cancel his South Africa trip.

Ela Gandhi, grand daughter of Mahatma Gandhi and trustee of Gandhi Development Trust hence presented the award in India during the Kalachakra preaching. Also present for the ceremony were Kalon Tripa (Political Leader) Dr. Lobsang Sangay and the representative of the Central Tibetan Administration from Delhi, Mr. Tenpa Tsering.

Ms Gandhi, in her speech expressed her disasppointment over the whole South African visa fiasco regarding the Dalai Lama and said "There is no justification for such disrespectful treatment."

"Peace and the survival of life on earth as we know it are threaten by human activities which lack a commitment to humanitarian values. This lack of respect extends even to earth's human descendants, the future generations who will inherit a vastly degraded planet if world peace does not become a reality, and destruction of the natural environment continues at the present rate," she said, quoting the spiritual leader from his speech from 5 June 1986.

Referring to the 'shocking testimony of environmental degradation'  presented at CoP 17 in Durban, SA, last year, she also stated that the Dalai Lama's statement in 1986 is highly relevant in today;s world.

"You demonstrate the power of non-violence and show the world how the way of truth n love can overcome darkness n depsair," she added as she handed over the award to the Tibetan spiritual leader.

The Dalai Lama in his characteristic jovial mood accepted the award with a smile and a joke and said, "I highly appreciate the fact that I am being awarded the award for peace and reconciliation from the Mahatma's granddaughter in the land where Buddha attained enlightenment."

Speaking highly of Mahatma Gandhi's ideals, the 76-year-old spiritual leader spoke about his advocacy of non-violence.

"In order to acheive genuine non violence, we need disarmament. Peace can be achieved once the world becomes a de-militarised planet," he stated.
"Mental peace results in non-violent actions and mental unrest causest he opposite. The real path to a happy life is not through money n power but through honesty and compassion," he concluded.