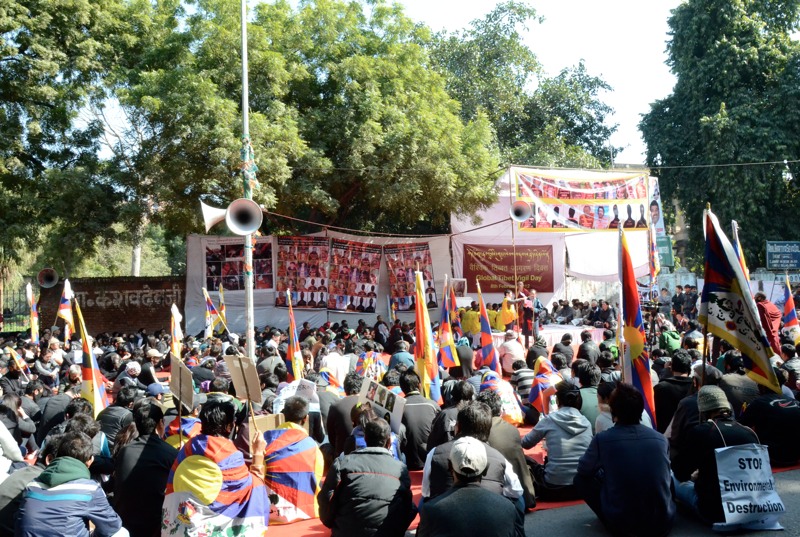 Delhi, India: - Delhi, India: - Thousands of Tibetans and supporters gathered at Jantar Mantar, New Delhi, the capital of India on February 8, to "highlights the critical situation of the Tibetan people inside Tibet and to express their solidarity to those who have sacrificed their lives in acts of protest against the oppressive Chinese regime."

These mass demonstrations come after twenty Tibetan self-immolation protests in Tibet, in addition to armed Chinese forces opening fire on Tibetans in Drakgo, Serta and Zomthang county of eastern Tibet, reportedly leaving at least ten dead and over three hundred wounded in total. More than one hundred Tibetan youths from Delhi also tried to storm the Chinese embassy in the Indian capital to show solidarity with Tibetans who have sacrificed themselves for Tibet.

"Despite the Communist Government of PRC's claim of having created a paradise on earth in Tibet in the last 52 years, the growing frustration of Tibetans against the Chinese policies is evident," a statement of the Delhi Tibetan Solidarity Movement explained.

"With the self-immolations of Tapey in 2009, and beginning with the self immolations of Lobsang Phuntsok on 16th March 2011, 20 Tibetans have self immolated so far in Tibet, out of which, 13 have succumbed to their injuries. The status of 7 others is still unknown. The last 7 cases have been reported in January and February this year alone. Two Tibetans in exile also attempted self-immolation in India and Nepal," said a letter of the solidarity movement to Dr. Manmohan Singh, the prime minister of India.

"Thousands of other Tibetans in Golog, Ngaba and Gyarong have peacefully demonstrated in the last few days. There may be many other unreported cases. Communications to all these areas have been cut off. Security in all of Tibet has been stepped up and massive military reinforcements has been reported that has resulted in heightened tension between Tibetans and Chinese authorities," the solidarity movement said.

"China's assimilation policy coupled with mass migration of Han Chinese into Tibet in the past 52 years has turned the Tibetans into a minority community in their own homeland," it continued.

"China's single window policy of development as the one and only means to resolve conflicts with no respect for local sentiments has not only contributed to flooding Tibet with Han Chinese, but has led to the unscrupulous extraction of Tibet's mineral resources thereby affecting Tibet's ecology," it stated.

"Control of Buddhist learning in the monastic institutions by strict and irrelevant laws prohibits religious freedom," it added.

"Independent media, diplomats and even tourists have been barred from visiting all areas where recent incidents occurred. All pleas to allow independent fact-finding delegations have been denied. Communication has been barred, and that forbids the free flow of evidence from inside Tibet of what has actually happened," the statement further said.

"Ever since the Chinese occupation of Tibet in 1959, China has turned the traditional Tibetan provinces into a real hell by killing and torturing Tibetans mercilessly to eliminate the root of our language and cultural identity," said Tenzin Kunzhang, a 34 Tibetan man, who was participating in the event.

Tibetans in exile on Wednesday again appealed to the international community, UN and governments to call on China to review its existing policies on the Tibetans in order to have a truly harmonious society and genuinely uphold international Human Rights standards and norms. They also called on China to allow independent fact-finding delegations and members of the media to visit the effected areas and to seek the complete withdrawal of Chinese military from Tibetan monasteries.