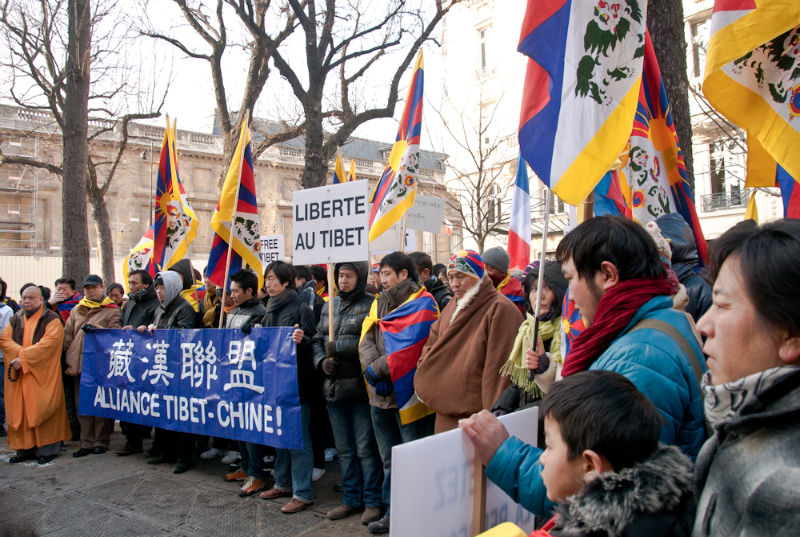 Dharamshala: - In support of and solidarity with Tibetan people suffering under the Chinese government's brutal and repressive policies on Tibet, the prayer service was held in several cities in Russian Federation on 8th February, a worldwide vigil and prayer day called by the Central Tibetan Administration-in-exile.

The prayer was participated by friends and supporters of Tibet and Tibetans, and Buddhist fellows in Moscow, St. Petersburg, and in the capitals of three traditional Buddhist Republics: Buryatia, Kalmykia and Tuva.

In Moscow, Tibet Culture & Information Center, the official agency of Central Tibetan Administration-in-Exile, organized the prayer and Tsog offering at Open World Center and it was joined by Russian Buddhists, traditional Buddhists from Tuva, Kalmykia and Buryatia currently residing in Moscow, and other friends and supporters of Tibet and Tibetans. Paying the homage to the twenty Tibetans who self-immolated in recent years for the just and noble cause of Tibet and Tibetan, Representative of H.H. the Dalai Lama to Russia & CIS, Nawang Rabgyal, briefed the assembly on the deteriorating and urgent situation prevailing in Chinese-occupied Tibet.

In Elista, capital of Kalmyk Republic, the Friends of Tibet Society (FTS) organized the vigil at three schools and later conducted prayer service at Chenrizig and Telo Buddhist Centers. Chairwoman of FTS, Mrs. Antonina Kookueeva, briefed the gathering about Chinese government's repressive policies on Tibet, intensified crackdown and undeclared martial law in Tibetan areas. The Friends of Tibet Society also sent memorandum addressed to Chinese Embassy in Moscow asking the Chinese government to change its repressive and harsh policies against the peaceful Tibetan people. A small group of Tibetan community organized prayer at their residential temple in Elista lighting thousands of candles dedicated for the welfare of Tibetans in Tibet.

In Ulan Ude, capital of Buryat Republic in Siberia area, Tibetan Community organized prayer and Tsog offering at Kun-kyab Buddhist Center, which was joined by Buddhists and friends of Tibet. Ven. Gedun, Head of Tibetan Community, briefed the gathering about the current prevailing situation in Tibet. The prayer service was also held in Kyizil, capital of Tuva Republic, border to Mongolia. In St. Petersburg, some members of Aryadeva Buddhist Center held prayer at Buddhist Temple called Kun-tse-choeling Datsang, which was built in 1915 by Avang Dorjiev (Tsen-shab Ngawang Doreje), Envoy of the great 13th Dalai Lama to Russian Tsar, also with financial contribution from the 13th Dalai Lama.

Around 300 Tibetans and Tibet supporters gathered in front of the National Assembly to show their solidarity with the Tibetans inside Tibet and to condemn the brutal repression by the Chinese authorities in Tibet. Among the participants were also members of the Chinese dissidents and democracy movement as well as Vietnamese, apart from French supporters.

Highly charged protesters raised slogans to call on the international community and specifically the French government to intervene in addressing the underlying human rights problems faced by the Tibetan people under repressive Chinese rule.

A one minute silence was observed to pay tribute to those Tibetan men and women, who sacrificed their precious lives for the restoration of freedom and Tibet, and particularly in homage of those 21 Tibetans who have self-immolated in the past years.

At Avenue Marceau, where the march culminated, statements from the Central Tibetan Administration were read out in both Tibetan and French languages.

A "hundred lamp offering" was also lighted to remember the sacrifices of Tibetan people before the close of the programme which began around 4 pm in the evening and lasted for more than 2 hours.

Reports of similar vigils have also been received from other French cities and towns such as, Bordeaux, Pau, Nimes, Clermont Ferrand and Metz.