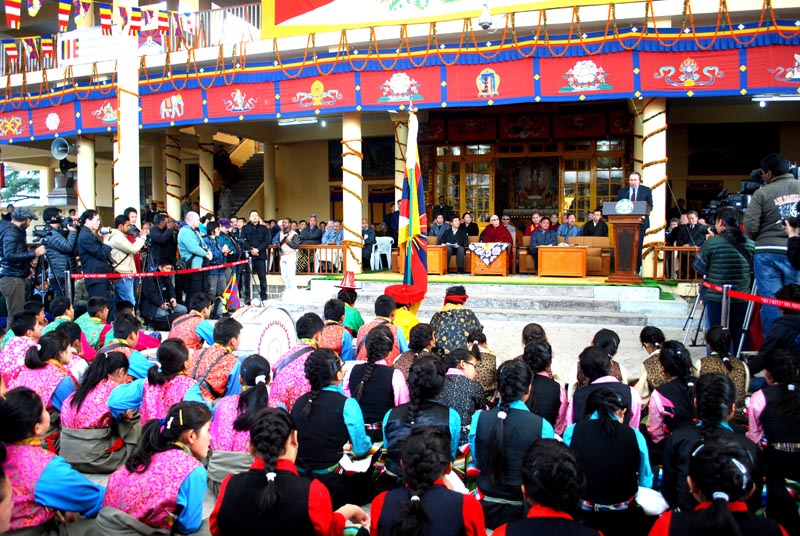 Dharamsala: - At 9.00 this morning three major figures in Tibetan culture, His Holiness The Dalai Lama, Tibet political leader Dr. Lobsang Sangay, and Speaker of the Tibetan Parliament Penpa Tsering, gathered with nearly five thousand supporters of the Tibetan cause at the main Tibetan temple in Dharamshala to commemorate the 53rd Uprising Day since the flight of His Holiness in 1959.

Also in attendance was Gianni Vernetti, member of the Italian Parliament and president of The Italy-Tibet Parliamentary Association, as were a number of Chinese supporters of the Tibetan cause.

This year The Dalai Lama offered no words on this Uprising Day, as he no longer considers himself the political head of the Tibetan people. It is the first time in 53 years that he has chosen not to do so.

Instead, the formal address to the Tibetan People was made by Dr. Lobsang Sangay, who declared that the transition of power did nothing to weaken the Tibetan exile base, called for free and fair elections inside of Tibet, criticized unequal hiring practices exercised by the Chinese, and called for greater autonomy within the Tibetan province. He also echoed his request to the international community to send a fact-finding delegation into Tibet.

He also placed a great deal of emphasis on the denial of fundamental human rights to Tibetans, "Today, there is no space for any conventional protests such as hunger strikes, demonstrations and even peaceful gatherings in Tibet. Tibetans are therefore taking extreme actions such as the ones by the 26 Tibetans who have committed self-immolations since 2009... Fault lies squarely with the hardline leaders in Beijing, so does the solution. The self-immolations are an emphatic rejection of the empty promises of the so-called ‘socialist paradise.'"

Gianni Vernetti spoke on behalf of the Italian Parliament to show solidarity with the Tibetan people. In his speech, he declared that self-immolations are a direct result of the military occupation of Tibet and the denial of freedom of expression and religious beliefs. He also criticized the Chinese government's undeclared martial law in Tibet, and said that the Italian Parliament adopted a resolution asking for a formal initiative demanding that the government of China end violence in Tibet, allow freedom of religion, and resume dialogues with The Dalai Lama.

"For more than 60 years after the military occupation of Tibet in 1959 the government of the People's Republic of China has been implementing a policy of forced assimilation and marginalization of Tibet. Human rights are being systematically denied to the Tibetan people. They are deprived of all political freedom and Tibetan language and culture are being gradually assimilated." Vernetti said.

Two speeches were also given by men who intended to initiate peaceful marches on behalf of Tibet.

After his speech, a number of weeping attendees offered him money to help him along his way.

A man named Migmar also gave a speech while wearing a black blindfold around his eyes. During his speech, he declared his intention to travel around India wearing the blindfold to represent the blindness of the international community to the Tibetan issue.

The attendees also engaged in a short prayer ceremony to honor those Tibetans who have died for the cause of bringing human rights to Tibet. Afterwards, the attendees marched to lower Dharamsala.

Uprising Day is observed on March 10 to remember the Tibetans who rose up in armed resistance against the Chinese invasion force.