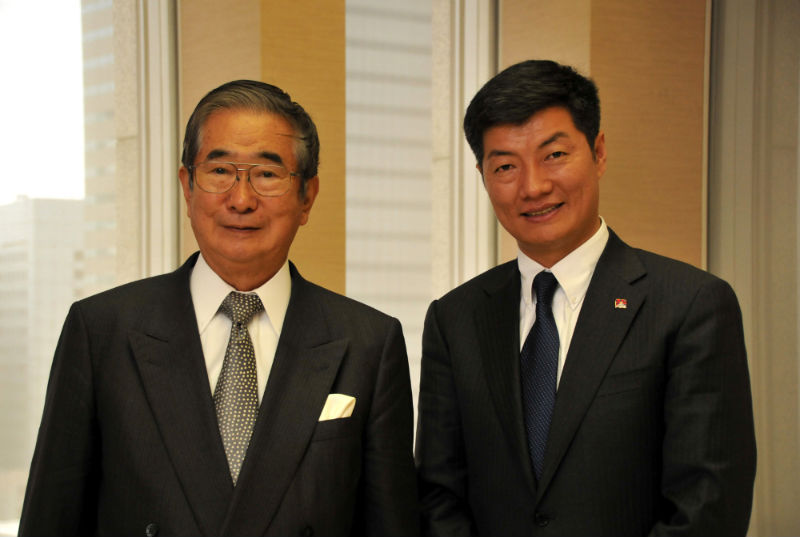 During his meeting with Shinzo Abe and Taro Aso, two former ministers, and Tokyo mayor Shintaro Ishihara, Kalon Tripa apprised them about the critical situation in Tibet in view of the tragic self-immolations of Tibetans due to the repressive policies of the Chinese government. He appealed to the Japanese leaders to lend their continued support towards resolving the issue of Tibet.

The Japanese leaders expressed their deep concern over the tense situation in Tibet, and said they stand by the Tibetan people.

Responsibility and solution to end self-Immolations lie with China

Kalon Tripa Dr Lobsang Sangay on the same day told reporters in Tokyo that the tragic self-immolations of Tibetans will end once the Chinese government stops its repressive policies in Tibet.

"The responsibility for the tragic self-immolations of Tibetans lies solely with the Chinese government and so does the solution," Kalon Tripa Dr Sangay said at a press conference in Tokyo in response to a question on whether the self-immolations in Tibet could be stopped.

Dr Sangay said: "Tibetans inside Tibet do not have any space and opportunity to express their aspirations and grievances. Even peaceful demonstrations by Tibetans are not allowed."

"Even if the Tibetans held peaceful protests they are bound to suffer harsh consequences at the Chinese authorities' hands. Eight Tibetans were shot dead by security forces for taking part in a peaceful protest earlier this year. Under such desperate circumstances, Tibetans are forced to take drastic actions like setting themselves on fire," Kalon Tripa said.

"Hence, the responsibility lies solely with the Chinese government, so does the solution," he added.

"We have repeatedly appealed to the Tibetans inside Tibet not to take drastic actions. Unfortunately, they might not have received our appeals due to blockade of phones and other communication lines by the Chinese government," Kalon Tripa said.

Kalon Tripa also answered questions on the status of the dialogue process between the Chinese government and envoys of His Holiness the Dalai Lama, and why he chose Japan for his first visit in Asia.

The press conference was organised the Foreign Correspondents' Club of Japan, which also hosted a luncheon reception in honour of Kalon Tripa's visit.

Earlier in the morning, Kalon Tripa had a dialogue with noted journalist Ms Yoshiko Sakurai on the situation in Tibet, for the Chichi magazine.