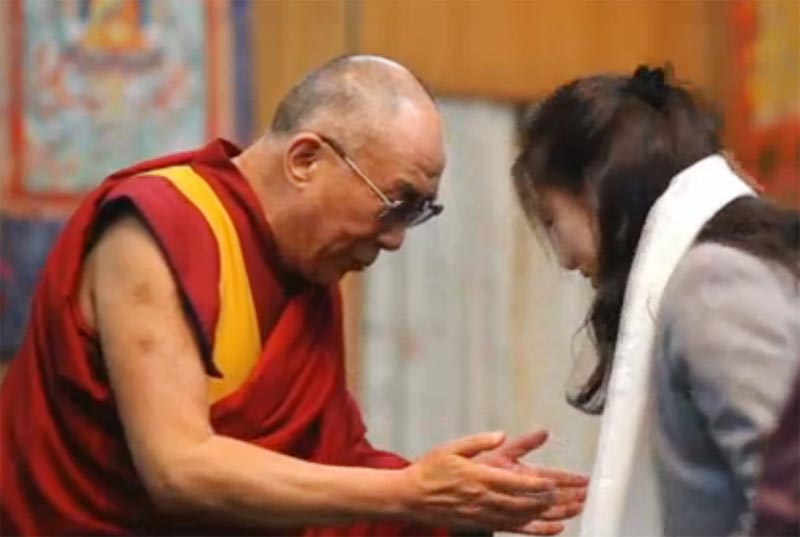 Dharamsala: - The Taiwanese television channel "Next TV" broadcast two interviews with His Holiness the Dalai Lama and Kalon Tripa (political leader) Dr Lobsang Sangay on April 7, during which both figures discussed the spate of self-immolations by Tibetans in Tibet and India.

Dharamsala: - The Taiwanese television channel "Next TV" broadcast two interviews with His Holiness the Dalai Lama and Kalon Tripa (political leader) Dr Lobsang Sangay on April 7, during which both figures discussed the spate of self-immolations by Tibetans in Tibet and India.

His Holiness said concerned people should examine the causes of the self-immolations.

"I think this problem [was] not created by...Tibetan Buddhist culture," he said, "[which is] very peaceful, very compassionate... This problem [was] started by totalitarian, blind policy. So the people who created that policy must think seriously about these things."

His Holiness added that the self-immolations are the result of the Chinese authorities' "lack of respect for others' lives... [It is a] very short-sighted and too much self-centred attitude - ‘My power! I have to control these people, even if necessary to kill!'"

In the second interview, Dr Lobsang Sangay differentiated between self-immolations in Tibet and in exile, saying, "As a human being, life is precious and you don't want anyone to die like that.

"In Tibet, they are doing it because there is no room for any form of protest - hunger strikes, rallies, demonstrations. Anything you do, the Chinese authorities will come and arrest you, put you behind bars, and sometimes you'll get killed.

"But outside, in the free world, you can organize any form of demonstration, any kind of rally, any kind of hunger strike. We just had three hunger strikers sat for 30 days in New York in front of the United Nations. So, when we have other avenues, we should use these avenues.

He continued that the Tibetan administration has made several appeals discouraging drastic actions, including self-immolation, both inside Tibet and especially by Tibetans in the free world.

However, he added, "As a Buddhist, when someone passes away, you pray for them. As a Tibetan, you show solidarity, because [the self-immolators] died for Tibet and Tibetan people. They died for us, our homeland and our people. That's our stand.

Dr Lobsang also stressed that the Central Tibetan Administration has issued directives/appeals that any protests held in exile be peaceful, legal and dignified.