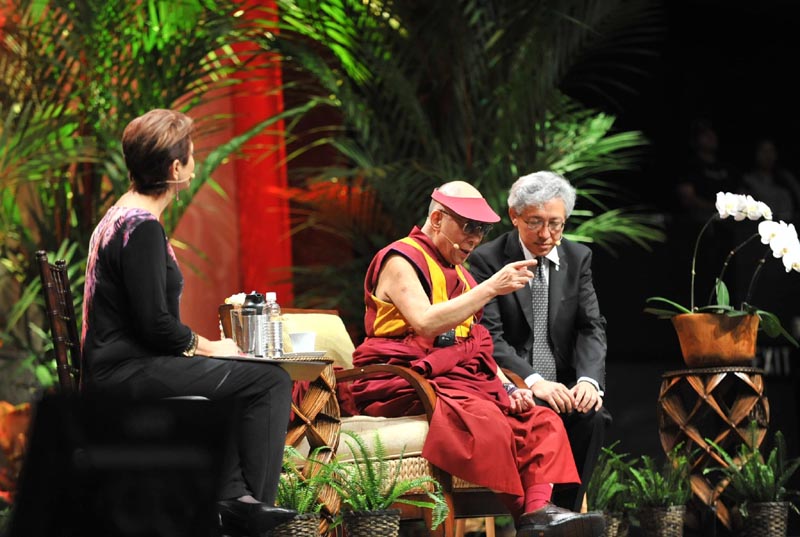 Honolulu, Hawaii: As a part of the last leg of his tour to Hawaii, the Dalai Lama on 16th April promoted warm-heartedness in his speech to a receptive audience of students and blessed Hokule'a, a Polynesian canoe that is scheduled to depart for a voyage around the world in 2013 to draw awareness Hawaiian culture.

Thanking the State Education Department in the Tibetan language, he proceeded to orate his speech titled ‘Cultivating Unbiased Compassion,' in English stating that he wanted the audience to get a taste of his mother tongue with a trademark dimpled smile.

Speaking of non-violence, the Tibetan spiritual leader stated that mere intelligence is not enough and that man being a social animal, an individual's future depends on that of the community.

In the course of his interaction with the students, the Dalai Lama addressed a variety of questions ranging across topics like education systems, political promises, ethics, morality and much more.

Referring to the people's states of minds during the post-world war era, and then the fall of the Berlin Wall he spoke about how people started to look deep inside themselves for inner peace, thus bringing about de-militarization in many places.

Advising the students to maintain a positive and optimistic approach towards life, he concluded his speech and proceeded to accept the canoe paddle and a ‘peace quilt' made by the students.

Following lunch, the Dalai lama progressed to Kualoa Regional Park and blessed Hokulea- The canoe that is scheduled to embark on a voyage around the world with a Khata (Traditional Tibetan scarf) and prayers.

Also present at the ceremony were the Mayor of Honolulu Peter Carlisle and the President of the Polynesian Voyaging Society, Nainoa Thompson.

Thompson, speaking of the similarities between the native cultures of Tibet and Hawaii as far as how people go about their daily lives said, "The Bridge is really a kind of core universal value."

"Hawaii is a culture of kindness and it's still that way, where many parts of the world it's not," he added.

In the press conference that followed the ceremony, the Dalai Lama was asked about the 30 self-immolations carried out by Tibetans in the course of one year to which he responded saying, "These were very, very sad developments."

"We have to look at the causes and conditions and these are related to the difficult experience of the Tibetan people for the past 50 to 60 years," he said as he mentioned the Panchen Lama's public statement of 1989 as to how the Chinese rule has brought about more damage than development in Tibet.

He also referred to the Chinese authorities as worshippers of the guns (referring to Mao Tse-tung's statement about power coming from the barrel of the gun), he mentioned that time had come for the authorities to investigate the real cause of the Tibetan resentment.

When asked about the situation in Tibet, the Dalai Lama mentioned Chinese Prime Minister Wen Jiabao's call for political reform and his warning about the rise of Cultural Revolution along with the subsequent dismissal of Bo Xilai by referring to them as signs of hope.

It's the Dalai Lama's fourth visit to the islands and his first since 2008, when he went to Maui.

His Holiness departed Honolulu for San Diego in California on April 17, 2012 arriving there in the evening. His programs will begin today as per the schedule.