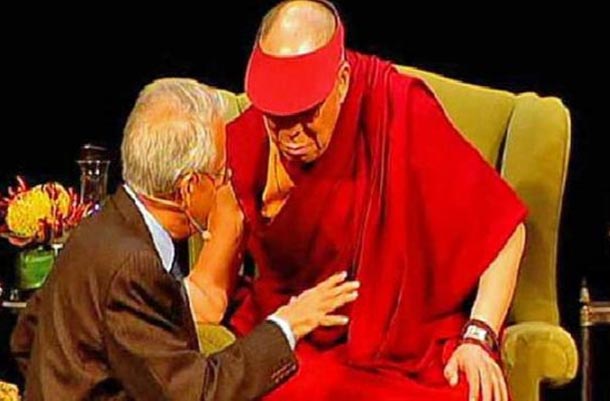 San Diego, California, USA, 18 April 2012 - The spiritual leader of Tibet and Nobel peace laureate, His Holiness the 14th Dalai Lama, on the first day of a five-day visit to Southern California, urged students at UC San Diego on Wednesday not to be distracted by materialism.

A large house and a good salary, His Holiness told a morning gathering at the La Jolla campus, should not be considered the "meaning of life." "No, certainly not!" the 76-year-old spiritual leader of the Tibetan people said during a panel discussion on global warming attended by more than 4,000 persons in the campus basketball arena.

People everywhere should strive to promote tolerance, nonviolence and concern for the environment, His Holiness said. "This is something serious, very serious," he said. "This small blue planet is our only one.... This beautiful planet (was) created by God. It is wrong just to exploit (it) as much as possible without care."

At a press conference before the panel discussion, he was asked about the Los Angeles Times decision to publish photos of American soldiers with dead Afghan insurgents: His Holiness said he was neutral on U.S. involvement in Afghanistan but prefers a non-violent approach to resolving conflict. "All violence is wrong, I abhor all violence," he added.

"The world belongs to humanity and each country belongs to its own people, not religious leaders or kings or queens or emperors or political parties.... America belongs to about 300 millions of American people, not (the) Republican or Democratic party," His Holiness stated.

The Nobel Peace Laureate also said the news media's sniffing around is crucial to democracy. "You should have long nose, like elephant nose," he said.

His Holiness also addressed global warming to about 4,200 students and others at the University of California, San Diego, and during the brief news conference, he preached compassion and fielded questions.