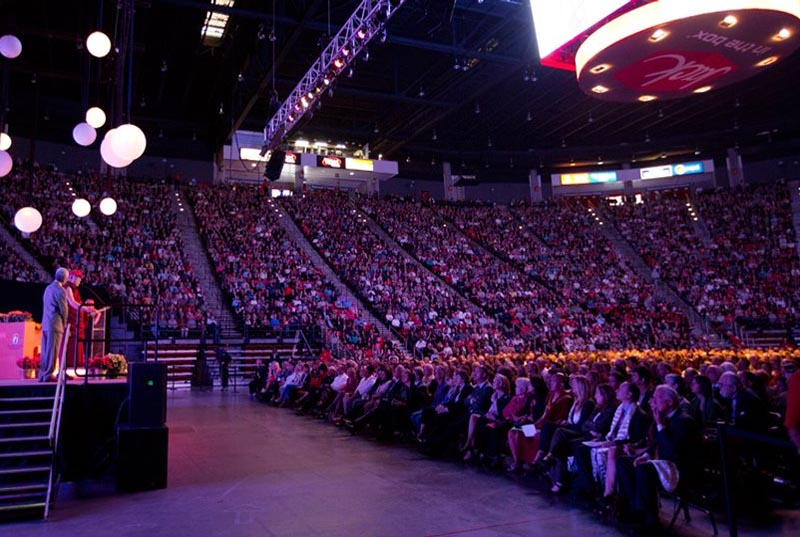 San Diego, California, USA: - The spiritual leader of Tibet, His Holiness the 14th Dalai Lama, spoke to a rapt crowd of 12,000 at San Diego State University on Thursday morning. He stressed the importance of compassion and the oneness of humanity.

He told his listeners, many of them college students, that they should make good use of their time on earth. "You have the opportunity to make a new world, a happy world. My generation, not."

His Holiness the Dalai Lama, the 1989 Nobel Peace Prize laureate, was given a key to the city of San Diego, a University of San Diego Medal of Peace, and three colorful visors.

San Diego Mayor Jerry Sanders lauded His Holiness the Dalai Lama's speech. "Throughout his teachings, His Holiness encourages all of us to strive for a better future, through peace and compassion for others," he said. After Thursday's event, His Holiness headed to Los Angeles.

His Holiness' visit has heightened awareness of the struggles within Tibet, a Himalayan plateau that has sought greater autonomy since it was completely seized by China's military in 1959. In response to Chinese repression of Tibetan Buddhism and cultural traditions, many young Tibetans have protested recently by setting themselves on fire.

In recent months, those protests have intensified. More than 30 Tibetans have engaged in self-immolation so far this year; most have died.

During an interview with BBC on Wednesday, he said that the Tibetan struggle is a "very sensitive political issue. If I involve that, then retirement from political power is meaningless. Whatever I say, the Chinese government immediately manipulates... they do not understand what's the real Tibetan feeling."

He set out from Dharmsala last week to begin his international tour, which includes visits to Hawaii, San Diego, Los Angeles, Chicago and Ottawa, Canada. His Holiness will speak to various audiences over the next few days, but his central message is expected to remain the same.

"The compassion emotion," he said Thursday, "is the most important part of life." His Holiness said the seed of compassion was in each and every individual. He said even animals like cats, dogs and birds respond to affections shown to them.

Explaining that compassion was something that needed to be cultivated by oneself, His Holiness talked about his growing awareness of western societies since his first travel to Europe in 1973. His Holiness said the situation in these countries clearly indicated that material development alone cannot bring about inner peace.

His Holiness added that physical comfort couldn't subdue mental affliction. On the other hand, if one is mentally calm, this can subdue any physical pain.

His Holiness also talked about the situation of gap between the rich and the poor throughout the world. He said during his visits to Africa and Latin America, he could see this condition. He said one of the issues affecting the world is corruption, which he said is the new cancer.

He said these problems come about because of a lack of self-discipline and training in moral ethics. Although there are people who say that moral ethics should be based on religion, His Holiness said such a situation would have limited effect as no one religion can claim universal acceptance. Since the problem, is universal, he said that we need to look for a universal solution. His suggestion was to look for an approach that is not grounded in religion.

His Holiness said people could understand the importance of the need to promote compassion through common experience, use of their common sense and through scientific findings about the connection between a healthy body and a healthy mind. He said calm mind could only be developed through warm heartedness.