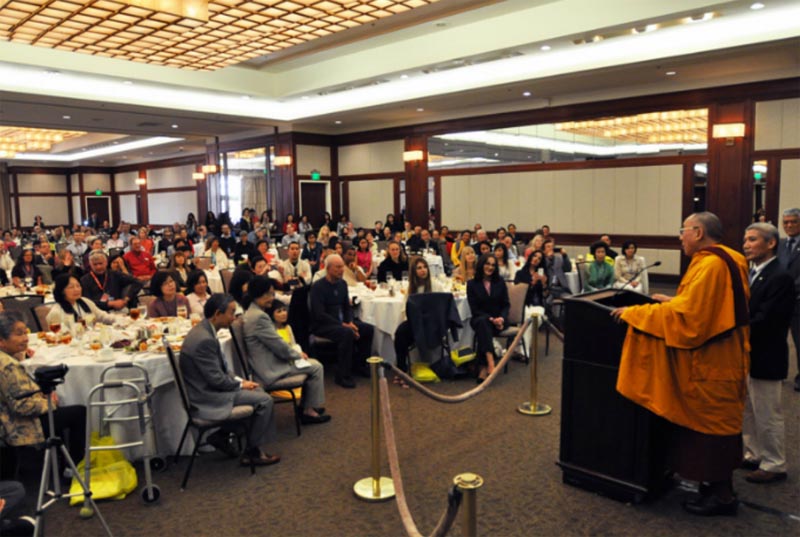 Dharamshala: - On April 22, the spiritual leader of Tibet, His Holiness the Dalai Lama arrived in Rochester, Minneapolis. He was greeted by several hundred members of the Tibetan American Foundation of Minnesota and received by officials and doctors of the Mayo Clinic.

Later, he addressed more than 100 Chinese students and scholars studying in Minnesota, and told them it is in the Tibetan people's own interest to remain within the People's Republic of China. However, he said, there should be meaningful autonomy.

His Holiness continued that the 17-Point Agreement Tibet signed with China was in the spirit of ‘one country, two systems', but that some local officials had made a pledge during the Cultural Revolution that they would exterminate the Tibetan language within 15 years. He also mentioned the Chinese Party Secretary of Tibet Autonomous Region's banning of the study of classical Tibetan texts in Tibet University in Lhasa.

He told the audience that he had tried his best for the past 30 years to work for a solution to the Tibetan issue but that the Chinese United Front has destroyed his spirit. China aspires to be a superpower, he said, and if it did so with joy, liberty and freedom, the Tibetan people would feel proud to join in.

However, he concluded, China is a closed, secretive and unpredictable society which needs to open up, comparing it unfavourably to other countries such as Taiwan and the US where politicians are accountable to the law.

In the following question-and-answer session, His Holiness was asked about the spate of self-immolations in Tibet. He said that, historically, they have taken place not only among Tibetans, but also among Chinese, Vietnamese and even in the former Czechoslovakia, and that they are the actions of people who are in a desperate situation but do not want to harm others.

He added that the issue is politically sensitive and so, since he has retired from politics, he did not want to comment further.

Questioned about China's attitude towards the 2008 Tibetan uprising in relation to the Olympics, His Holiness responded that he had actually supported the Beijing Olympics, and that this was recognized by a member of the Olympic Committee.

Finally, His Holiness said the People's Republic of China belongs to its 1.3 billion citizens, who have the right to know the truth in order to distinguish right from wrong. He called for transparency and said censorship is immoral.

His Holiness will undergo a routine check-up at the Mayo Clinic during his stay in Rochester, and on April 24 he will join a panel discussion on resilience through mindfulness there.