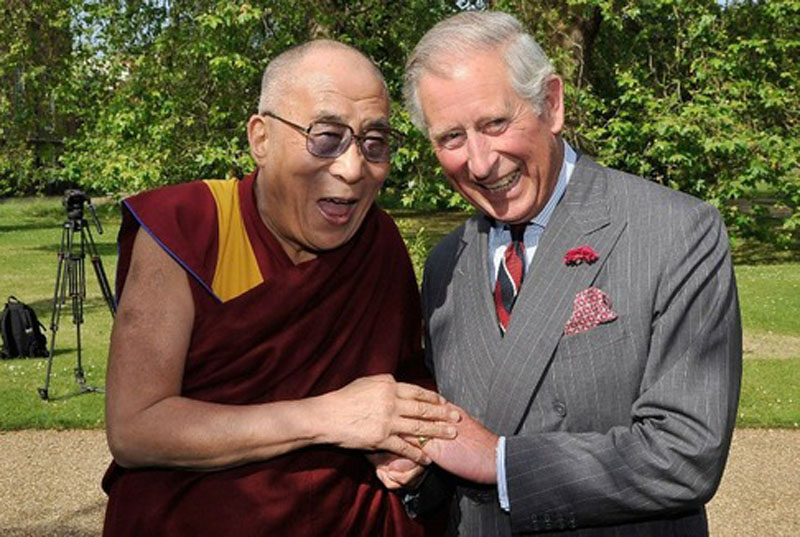 Dharamshala: - The spiritual leader of Tibet, His Holiness the Dalai Lama, on his 10 day trip to Britain met Prince Charles and his wife Camilla. The Prince of Wales and the Duchess of Cornwall welcomed His Holinesss the Dalai Lama at Clarence House. The meeting was an informal one full of jokes and genuine warmth.

His Holiness sang praises of Prince Charles who he had met four years earlier; 'I always consider him a very close, best of friends. Right from the beginning, I felt "very nice person, good human". He (has) proved a very wonderful, sensible, good human being.'

While welcoming the Tibetan spiritual leader, Charles I said to have thrown up his arms, and then placed his hands together in a prayer sign before hugging the His Holiness and sharing a few words with him.

Waiting next to the Prince was his wife Camilla, The Duchess of Cornwall who kissed the exiled Buddhist leader before the group moved into the house's garden room for their informal chat.

While the details of their talk have not been released, it is likely they discussed the latest situation in Tibet and other spiritual matters.

The trio walked around the Clarence House gardens and met around 80 of Charles' household staff who gathered to see His Holiness.

Before leaving he touched foreheads with Camilla. Charles again clasped his hands in front of himself before the royal couple waved the spiritual leader off.

The Tibetan spiritual leader is on a 10-day tour of Britain where he is giving public talks. Before meeting the Prince, the Dalai Lama addressed representatives of different religions at Westminster Abbey. According to the BBC, the 76-year old urged the spiritual leaders to "work together to serve humanity".

"I am quite sure that religions still have an important role to make a better humanity," he had said.

The day earlier, he met Aung San Suu Kyi, the Burmese leader who had spent two decades under house arrest.  Since her internal exile she has campaigned for a democratic Burma and on April 1st of this year was able to successfully win a seat in the lower house of the Burmese parliament.