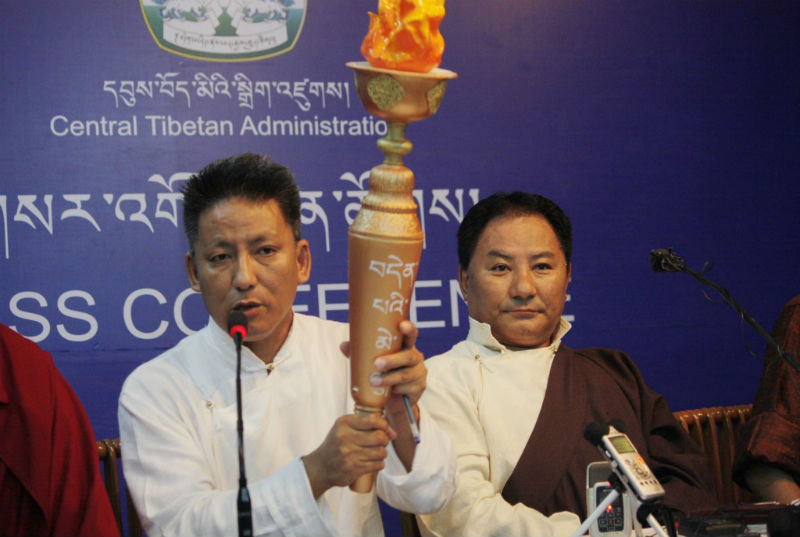 Dharamshala: - The Tibetan Parliament-in-Exile (TPIE) at a press conference Wednesday, June 27 said it has decided to carry out a number of global movements, including a worldwide 'Flame of Truth Relay' for the current tense situation in Tibet.

"Due to grave and worsening situation in Tibet, the Tibetan Parliament-in-Exile (TPiE) has decided to carry out a number of activities as discussed during its closed door meeting held on 22 March 2012. Accordingly on 27 March, the Standing Committee of the Tibetan Parliament-in-exile decided on the Flame of Truth Relay as one of its activities", according to a report published by Central Tibetan Administration media; tibet.net.

"Over the last sixty years since the Communist China's brutal occupation of Tibet, Beijing has never changed its hard-line policies on Tibet. This has resulted in China exploiting not only Tibet's rich natural resources but also to kill, torture, imprisons and harass the Tibetan people continuously. However, we have held onto to our unique culture, spiritual tradition and identity to struggle for the truth.

Since 2008 the Chinese security forces have particularly cracked down hard on Tibetans leading to numerous deaths and countless tortures. The situation is getting worse each day. Consequently, the Tibetan people have been setting themselves on fire one after another to demand a peaceful resolution of the Tibetan issue, return of His Holiness the Dalai Lama to Tibet and to let the UN and the international community know about the Tibetan people's aspirations and the sorrows hidden deep within their hearts. Tibet today is like hell on earth.

Standing in solidarity with the courageous and selfless acts of our brave brothers and sisters inside Tibet and to make world aware of their selfless acts and aspirations, the Tibetan Parliament-in-Exile will commence the worldwide Flame of Truth Relay on 6 July, the day on which our beloved spiritual leader His Holiness the Fourteenth Dalai Lama was born. The relay will begin with following demands:

1. The United Nations must discuss the issue of Tibet based on the resolutions that it has passed in 1959, 1961 and 1965, and continuously make efforts to fulfil the substance of these resolutions

2. An independent international fact-finding delegations must immediately be sent to investigate the ongoing crisis in Tibet

3. The United Nations must take special responsibility to ensure that the basic aspirations of the Tibetans inside Tibet are fulfilled

In order to meet the terms of these demands hundreds of thousands of signatures will be collected in different countries across the world, including India through which the Flame of Truth will travel. The historic relay will be concluded on 10 December with submission of appeal letters and signatures simultaneously to the UN Headquarters in New York City, UN Human Rights Council in Geneva and UN information office in New Delhi."

The Parliament also has written a letter to the United Nations asking it to send an independent international fact-finding delegation immediately to investigate the ongoing crisis in Tibet. Click here to access the appeal letter and click here to view route map.