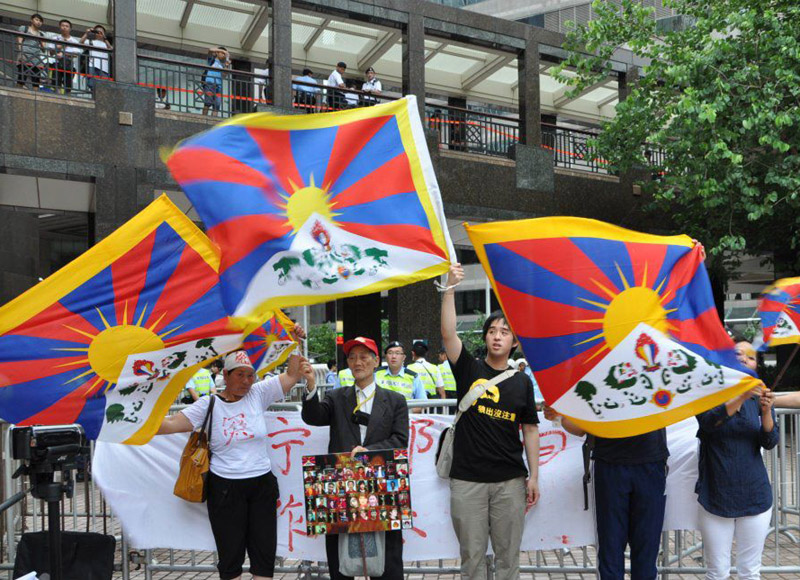 Dharamshala: A pro-democracy heckler got hauled away on July 1 for interrupting a speech by Chinese President Hu Jintao, who was in town from June 29 to July 1, at the swearing-in of Hong Kong's new leader, Leung Chun-ying.

Tens of thousands of residents marched to protest Chinese rule on the 15th anniversary of Asia's financial hub's return to Beijing's control and the establishment of the Hong Kong Special Administrative Region of the People's Republic of China.

Among the attendees were Tibetan activists and supporters also protesting President Hu's visit to Hong Kong to denounce his failed policies in Tibet and China. From his government's harsh crackdown against pro- Tibet supporters to implementing martial law in Tibet in 1989, President Hu continues to assert the failed policies that deny Tibetans their basic rights and contributes to the deteriorating situation inside Tibet.

"Chinese President Hu has tried - and failed - to convince the world that China is more open and democratic and that Tibetans are somehow prospering under Chinese rule," said Dorothy Hui, one of the organizers in Hong Kong. "His brutal and violent occupation of Tibet, and abuses committed against his own people, clearly show the truth that China remains an unchanged, repressive and authoritarian state."

A report named 'Hu Failed Tibet,' detailing the President's failed policies regarding Tibet, will be released during his visit.

There have been 42 recorded cases of self-immolations in and outside Tibet, with at least 31 of them dying.  Referring to these cases Brigitte von Bulow, chair of United Nation for a Free Tibet explained that, "These unprecedented acts are a direct response to the decades of violent and repressive policies Tibetans have endured under Chinese occupation, and a cry to the outside world for help." She also stated that, "Wherever Hu Jintao goes we will be there, ensuring that he hears our message that his leadership has been a failure and the incoming Chinese leaders realize they must address the Tibet issue correctly".

His government has had ten years to address the issues that Tibetans currently face, but instead of using his position to set right the wrong President Hu has stuck to the work he started as Party Secretary of the Tibet Autonomous Region, implementing his hard-line policy which is a combination of harsh crackdowns on separatism and economic development.

Dorothy Hui expresses that China is an example of an authoritarian dictatorship and ever since Hong Kong was "returned" to China in 1997 there has been a suppression of their rights, freedom, language and writing. Hong Kong and Tibet share similar fates, where Tibetans have risen up against China's crackdown in their homeland. "Hong Kong citizens must go beyond the rhetoric of human rights by taking substantive action to press Government and China's leaders to respect the Tibetan people's right to freedom and promote change in China.", Dorothy Hui remarked.

United Nation For a Free Tibet (Hong Kong) members and pro-Tibet supporters held a rally in Canal Road Flyover, Wan Chai to bring to light the deepening crisis in Tibet, and condemn President Hu's failed policies with regards to the Tibet issue. After the rally the Tibetan activists joined the Hong Kong 1 July marches, heading to Chinese Liaison Office.