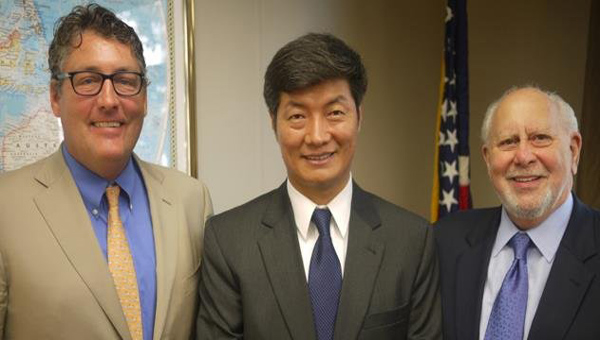 The BBG's website describes the organization as an independent entity which is responsible for 'all U.S. Government and government-sponsored, non-military, international broadcasting'. The board funds the Voice of Asia and Radio Free Asia, amongst other broadcasting services around the globe.

The one hour meeting took place at the organization's headquarters in Washington and Mr Sangay was joined by various members of his delegation including:   Lobsang Nyandak, Representative of His Holiness the Dalai Lama to the Americas; Kelsang Aukatsang, senior advisor to the Kalon Tripa; and Jigme Namgyal, private secretary to the Kalon Tripa; and Todd Stein, director of government relations for the International Campaign for Tibet.

BBG have been instrumental in recent years in covering the worsening political situation in Tibet. They have diligently covered issues such as violations of human rights within Tibet and the Chinese government's crackdown, in particular after the 2008 uprising and during the self-immolations of the last few months.

The BBG offers around-the-clock coverage of events of interest to Tibetans, including short-wave services seven days a week and a constant audio signal by satellite, television broadcasts, plus an Internet presence that can be viewed anywhere in the world.

Next week on the 26th of July, the organization will release a report on Tibetan's media use. The research report was carried out in conjunction with Gallup, and the data was collected from Tibetan travelers who recently visited India to hear His Holiness the Dalai Lama's recent Kalachakra teachings.