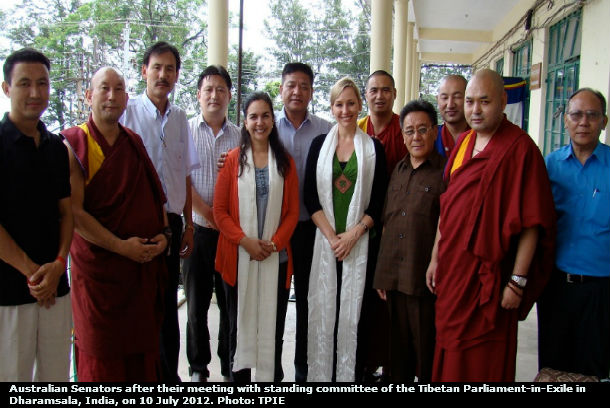 Dharamshala: - A two-member Australian Parliamentary delegation visited the Tibetan community in Dharamsala from 10 - 13 July. The delegation said they strongly support the peaceful Tibetan movemen, and would urge the Australian government officials to engage with their Chinese counterparts in resolving Tibet problems.

Senators Lisa Singh-MP, Labour Party and Larissa Waters-MP, Green Party, met the standing committee of the Tibetan Parliament-in-Exile. Speaker Penpa Tsering briefed the two senators about the critical situation inside Tibet and appealed to them to support the just cause of Tibet.

They visited Tibetan cultural, religious and educational institutions, and all spectrum of Tibetan civil society in and around Dharamsala.

The senators said they would impress upon the Australian government and their allies to engage the Chinese government in resolving the issue of Tibet.

Senator Lisa Singh is a Labor party MP from Tasmania. She is the first person of South Asian decent to be elected to the Australian Parliament in 2010. She is a member of the Australian All-Party Parliamentary Group for Tibet.

She met His Holiness the Dalai Lama in her home state of Tasmania. In March 2012 she met a group of Tibetan representatives in her office as part of the Tibet Advocacy Project, and has recently joined the Australian All-Party Parliamentary Group for Tibet.

Senator Larissa Waters is a Greens party senator from Queensland since 2010. She has met local Tibetans in her office in Brisbane.