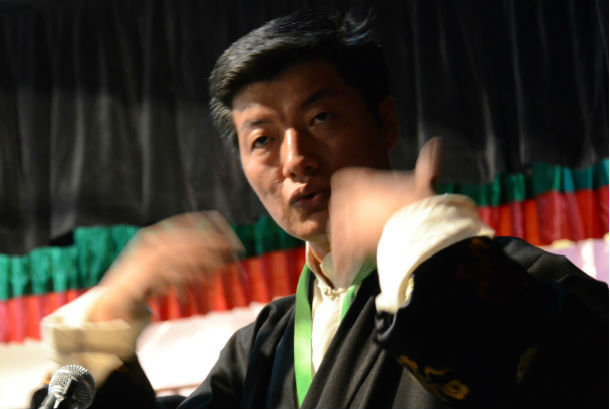 Washington DC: - Tibetans will continue to press for freedom of their homeland, now ruled by Beijing, even if their struggle takes "another 50 years," Tibet's exile prime minister said Friday as he expressed readiness to resume talks with Chinese authorities on the status of the troubled region.

Lobsang Sangay, who was elected last year as prime minister, or kalon tripa, of Tibet's India-based exile government, said that he still hopes for "meaningful" talks even though Tibetan spiritual leader the Dalai Lama's envoys to the dialogue with Beijing quit a month ago after talks stalled.

"We are always ready to appoint special envoys for dialogue with the Chinese leadership whenever we receive the right signals," Sangay said in an interview with RFA's Tibetan service in Washington, where he met with U.S. officials and lawmakers.

China has ruled Tibet since 1950, and the Chinese government has repeatedly accused exiled Tibetans, including the Dalai Lama, of stoking dissent against its rule. The Dalai Lama fled to India in 1959 after a failed uprising.

Lodi Gyari and Kelsang Gyaltsen, who served as the Dalai Lama's personal representatives in nine rounds of discussions with China beginning in 2002, resigned their posts in June.

The Dalai Lama last year stepped down as political leader of the Tibetan people, devolving his responsibilities to Lobsang Sangay.

And though China insists it will speak only with the Dalai Lama's representatives, refusing to speak directly to the exile government, "we are more concerned with the substance of the dialogue than with the title of the envoys who consult with China," Sangay said.

"We are not discouraged by anything the Chinese government says or does ... but we are unwavering on the path of the Middle Way," Sangay said, referring to the Dalai Lama's policy of seeking only greater autonomy, and not independence from China, for Tibet.

"The ball is now in China's court. Tibetan exiles are prepared to sustain our struggle even if it takes another 50 years," Sangay said.

In a growing wave of challenge to China's rule, 44 Tibetans have set themselves ablaze in self-immolation protests so far in a bid to push for greater freedom and the Dalai Lama's return.

Though China has repeatedly claimed that Tibet's exile government has incited the fiery protests, "we have made it very clear in numerous official statements that we appeal to Tibetans not to resort to drastic forms of protest, including self-immolation," Sangay said.

"At the same time, we need to highlight the underlying causes of [these protests] and the purpose for which they gave up their lives."

"Self-immolation is a political protest; there is no other way for Tibetans to protest," he said. "As compatriots, we urge Tibetans to show solidarity with the goal of these sacrifices."

Lobsang Sangay met on Thursday with Senator John Kerry, Chairman of the Senate Foreign Relations Committee, and with Speaker of the House of Representatives John Boehner.

In this visit and during previous visits, Sangay said, "we have interacted constructively with all key U.S. officials who are responsible for issues related to Asia, Tibet, and China, and particularly with Maria Otero, the State Department's Special Coordinator for Tibetan Issues."

"Our impression is that U.S. support for Tibetan concerns has remained steadfast and strong," Sangay said.