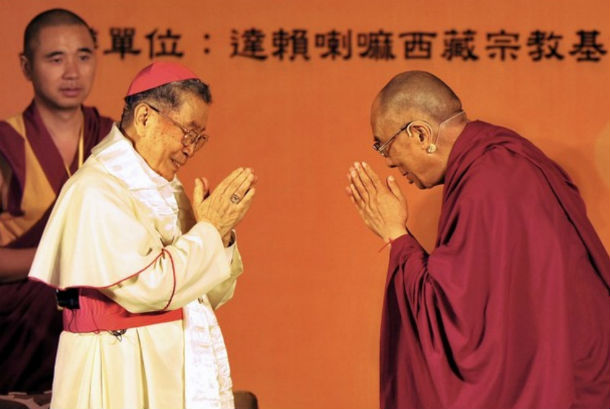 Dharamshala: The spiritual leader of Tibet, His Holiness the Dalai Lama expressed sadness at learning of the passing away of Cardinal Paul Shan Kuo-his, S.J. Taiwan's Catholic leader, who was diagnosed with lung cancer in 2006, died of multiple organ failure on Wednesday.

In a condolence message, His Holiness the Dalai Lama said: "I am saddened to learn about the passing away of Cardinal Paul Shan Kuo-his, S.J. Please accept my heartfel condolences at this loss and also please convery my sentiments to members of your congregation.

"I remember vividly my warm meet ing with Cardinal Shan prior to the public dialogue on religious harmony that we had together during my visit to Taiwan in September 2009. As on e of my life-long commitments," said His Holiness.

"I make every effort to promote religious harmony and understanding among major religious traditions. I believe my dialogue with Cardinal Shan helped to raise awarness about our common messages of love, compassion, forgiveness, contentment and self-discipline," said the Nobel Peace Laureate.

"With my prayers and good wishes," His Holiness said in the message.

Catholic Cardinal Paul Shan, who was diagnosed with lung cancer in 2006, died of multiple organ failure Wednesday evening, August 22, 2012 at the age of 88, according to Teng Shih-hsiung, superintendent of Cardinal Tien Hospital in New Taipei.

Teng said Shan was admitted to hospital Aug. 20 with pneumonia and his situation took a sudden turn for the worse on Wednesday evening. The cardinal passed away at 6:42 p.m., Teng said.

Shan, who was born in Dec. 2, 1923 in China, was the first Catholic cardinal to serve in Taiwan. He was appointed to the position by Pope John Paul II in 1998. Shan retired in 2006, the same year he was diagnosed with lung cancer and given four to six months to live.

He was known as an educator and an advocate for peace. He served as chairman of Fu Jen Catholic University and was later named honorary chairman.

According to Taiwan media reports, the Buddhist organization was scheduled to give Shan an award in September 2012 in recognition of his special contribution to promoting life education in Taiwan.